Jul 21, 2017 10:45 AM PHT
Agence France-Presse
Facebook Twitter Copy URL
Copied
This year has seen waves of protests and bouts of violence in the Rif, where residents have long complained of neglect and marginalization 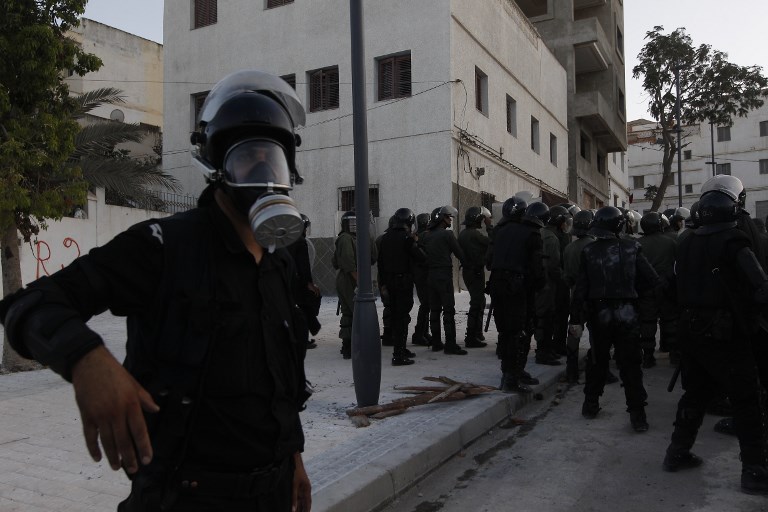 AL-HOCEIMA, Morocco – Police in the northern Moroccan city of Al-Hoceima on Thursday, July 20, fired tear gas to disperse protesters and stop them marching in defiance of a government ban.

Organizers from the Al-Hirak al-Shaabi movement dubbed the demonstration the “million-man march” and said they would go ahead with it despite an injunction.

Al-Hoceima, the main port in the Rif region, has been hit by unrest since a fishmonger was crushed to death in a rubbish truck last year as he tried to retrieve swordfish confiscated for being caught out of season.

This year has seen waves of protests and bouts of violence in the Rif, where residents have long complained of neglect and marginalization.

Scores of police could be seen around Al-Hoceima since early morning, and by early afternoon they began sealing off access to all the main squares while shops were closed, an Agence France-Presse journalist said.

Al-Hirak has won strong support among the region’s diaspora and many former Rif residents living abroad had returned to the city to join the march.

By late afternoon hundreds of people began gathering in several meeting points across the city intent on marching as planned, but as they tried to advance the police charged and pushed them back.

In the Sidi Abed neighborhood, police fired tear gas at demonstrators who were chanting “Long live the Rif” and “Long Live Zefzafi” – in reference to jailed Al-Hirak leader Nasser Zefzafi.

Witnesses said demonstrators hurled stones at the police as they charged and knocked some on the ground, and that security forces threw stones back at them.

Police arrested around 12 activists, including the head of a news website, Hamid El Mahdaoui, according to local journalists.

An Agence France-Presse cameraman said he saw two people being taken away by the security forces.

Seventy-two police officers were wounded from stones being thrown and 11 of the protesters were injured from the tear gas, Morocco’s MAP official news agency reported Al-Hoceima authorities as saying.

“All the injured have left hospital, with the exception of two officers who are in a serious condition,” the agency reported, adding that two police vehicles were torched by protesters.

Following the death of the fishmonger in October, calls for justice snowballed into a wider social movement demanding jobs, development, and an end to corruption in the mainly Berber region.

After months of protests and frequent clashes between protesters and police, authorities cracked down, arresting more than 175 people including the movement’s leader Nasser Zefzafi.

Tensions have eased in recent weeks and earlier this month security forces reduced their presence in Al-Hoceima and another northern city Imzouren, which had been on virtual lockdown.

Authorities have promised to do more to help the region and relaunched a 2015 program to improve its infrastructure, health facilities and education services by 2019.

“We are in a country where there is no freedom of expression. We have asked for hospitals, job, public transport. What is wrong with that?,” asked one of the protesters on Thursday.

The 6 parties in Morocco’s governing coalition this week issued a joint appeal for residents to stay away from Thursday’s march.

Ali, a political science researcher from Al-Hoceima living in Canada, said he had returned to the city to “show my support for the Hirak movement” and that he had expected “an impressive march”.

Organizers said the march was to be “peaceful” and aimed also at protesting “against repression”.

Moroccan newspapers on Thursday raised concerns of a fresh outbreak of unrest, with daily Akhbar Al Yaoum‘s headlining its front page with “Al-Hoceima… day of anger and fear”. – Rappler.com