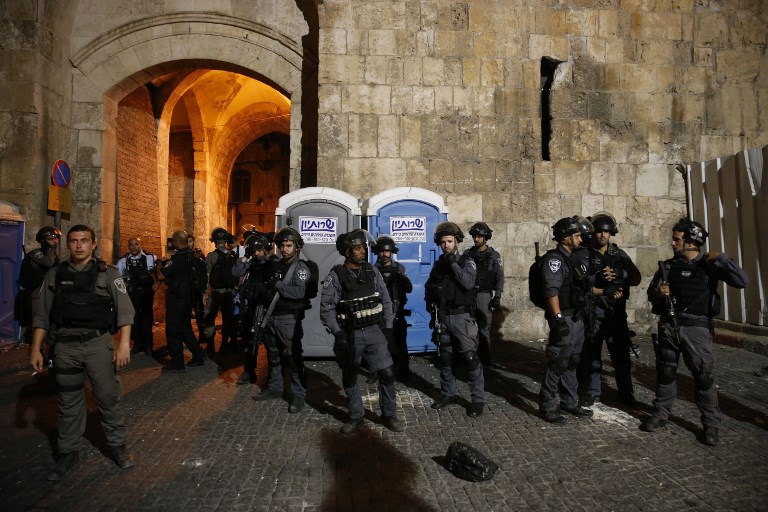 The rare measure came after Israeli ministers decided not to order the removal of metal detectors erected at entrances to the Haram al-Sharif mosque compound, known to Jews as the Temple Mount, following an attack nearby a week ago that killed two policemen.

“Entry to the Old City and Temple Mount will be limited to men aged 50 and over. Women of all ages will be permitted,” a police statement said.

Tensions have risen after police installed the metal detectors in a move Palestinians and other Muslims perceived as a means for Israel to assert further control over the site.

The controversy has resonated beyond Israel and the Palestinian territories, with the United States and the UN Middle East envoy expressing concern.

Israeli Prime Minister Benjamin Netanyahu stressed that the metal detectors were intended to ensure the safety of worshippers and visitors and not an attempt to disturb the fragile status quo under which Jordan is custodian of the site and Jewish prayer is forbidden.

Palestinians have been refusing to enter the compound in protest at the metal detectors, and hundreds have been holding prayers outside, with clashes occasionally breaking out with Israeli police.

The main weekly prayers on Fridays draw the largest number of worshippers – typically thousands – and speculation had been mounting that Netanyahu might order the metal detectors removed.

But after consultations with security chiefs and members of his security cabinet, Netanyahu decided not to order them removed.

An Israeli official said the security cabinet “has given police the authority to make any decision to ensure free access to holy sites while maintaining security and public order”.

“Israel is committed to maintaining the status quo on the Temple Mount and the freedom of access to the holy sites,” the official said in a statement.

Police said they had boosted their forces in and around the Old City, with units “mobilized in all areas and neighborhoods”.

The new security measures were put in place following a gun and knife attack near the site that killed two Israeli policemen on July 14.

Three Arab Israeli assailants fled to the compound after the attack, where they were shot dead by security forces.

Israeli police said the weapons were smuggled into the holy site which was then used as the launchpad for the attack.

Israel initially closed the compound for two days following the attack in a highly unusual move, shutting it for last Friday’s prayers.

It said the closure was necessary for security checks.

Israel began reopening it on Sunday, July 16, but with metal detectors in place to prevent weapons being smuggled into the compound.

Tensions have steadily risen since then. In the Gaza Strip, Islamist movement Hamas called for a day of “rage” on Friday.

In their Thursday conversation, Erdogan urged Rivlin to swiftly remove the detectors “within the framework of freedom of religion and worship”.

“Given the importance that Haram al-Sharif carries for the whole Islamic world, the metal detectors put in place by Israel should be removed in the shortest possible time and an end put to the tension,” the Turkish president said.

Rivlin told Erdogan that “the steps taken on the Temple Mount were intended to ensure that such acts of terror could not be repeated.”

The Haram al-Sharif/Temple Mount is central to the Israeli-Palestinian conflict.

It lies in east Jerusalem, seized by Israel in the 1967 Six-Day War and later annexed in a move never recognized by the international community.

It is considered the third holiest site in Islam and the most sacred for Jews. – Rappler.com