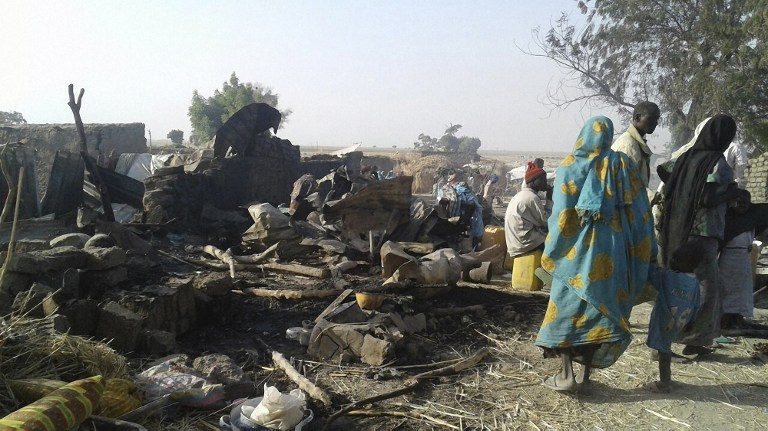 ABUJA, Nigeria (UPDATED) – Nigeria’s military on Friday, July 21, blamed an unexpected gathering of homeless people for a botched air strike that killed 112 at a camp for those displaced by the Boko Haram conflict.

Commanders at the time called the bombing a mistake and blamed “the fog of war”.

A Nigerian Air Force board of inquiry had been due to report in early February on the strike, which also injured nearly 100 people, many of them women and children.

But in a brief statement he blamed “lack of appropriate marking of the area” for the bombardment.

“Hitherto, people were not expected to amass at that location,” he said of the camp, which at the time was home to between 20,000 and 40,000 people and was run by the military.

“Furthermore, the location was not reflected in the operational map as a humanitarian base.”

Enenche said the homeless had gathered “near the camp”. At the time, aid agency workers said the first bomb landed just meters (yards) from the Red Cross office in the camp.

Six Nigerian Red Cross workers were among the dead.

“We are extremely worried by the statement of the Nigerian military,” charity group Doctors Without Borders (MSF) said. “The… camp was controlled and registered by the military in the state of Borno.”

“We call once again on the Nigerian authorities and all belligerent parties to ensure that the conduct of hostilities limits the impact on the safety of civilians.”

Previously, the military has attributed the bombing to a failure of intelligence caused by information provided by an unnamed foreign country.

Enenche said Boko Haram fighters, who were known to be active in the area in northern Borno state, typically amassed before attacking civilians.

“Hence, it (the location) appeared as a place that could equally be used for enemy activities,” he told a news conference in Abuja.

“Thus, when mass movement was noticed through aerial satellite observation, it was taken for Boko Haram terrorists activity, which needed to be neutralized with speed.”

The statement also said recommendations of the air force board of inquiry report, which was not published, included sharing of the precise locations of humanitarian activity with the military.

Reporters have been allowed to visit many camps across Borno but so far access to Rann has been extremely limited. – Rappler.com