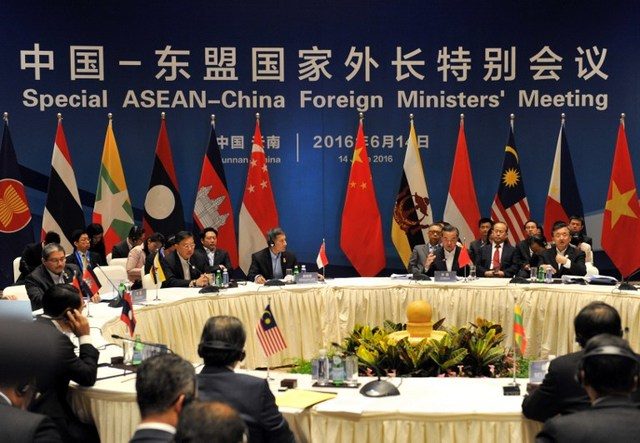 MANILA, Philippines – Foreign ministers from Southeast Asia and China are expected to endorse the framework of the Code of Conduct in the disputed South China Sea on Sunday, August 6 in Manila.

The formal endorsement will take place during a week of Association of Southeast Asian Nations (ASEAN) meetings to be held in the Philippine capital.

The endorsement is supposed to kickstart the process of crafting an actual Code of Conduct to “govern the behavior” of countries with competing claims in the South China Sea (West Philippine Sea), said Philippine Department of Foreign Affairs Spokesman Robespierre Bolivar.

He was speaking on Tuedsay, August 1, at a Malacañang news briefing.

“After the endorsement, approvals process has been dealt with, we expect that the talks on the actual Code of Conduct will begin in earnest,” he said.

The 11 foreign ministers are expected to endorse the framework as finalized by senior officials during a meeting last May.

Bolivar described the document as an “outline” that defines the nature of the Code of Conduct, detail the legal basis for it, and state “how countries should behave in the region.”

The framework was finalized ahead of time and Bolivar is hopeful that this “momentum” will carry over to the talks on the Code of Conduct itself.

Progress in coming up with a legally-binding code has been sluggish. After the concept was introduced in the mid-1990s, it was only in 2002 when Southeast Asian countries and China produced a non-binding Declaration of Conduct in the South China Sea.

Asked if an international court ruling won by the Philippines against China on claims in the disputed sea will be raised by Manila during the talks on the code, Bolivar said, “Anything that is to our interest, definitely, we will push.”

The ASEAN and China foreign ministers will gather in Manila for the 50th ASEAN Ministerial Meeting. Events will begin on August 2 and will culminate on August 8 with a “grand commemorative celebration” of the 50th anniversary of ASEAN.

Foreign ministers from Korea, Japan, United States, Canada, and other countries considered as ASEAN dialogue partners will be present as well. – Rappler.com