Aug 9, 2017 7:52 AM PHT
Agence France-Presse
Facebook Twitter Copy URL
Copied
The issue has become a new political headache for Macron after an online petition against creating the role garners around 285,000 signatures and an opinion poll showed a majority of French people are also opposed 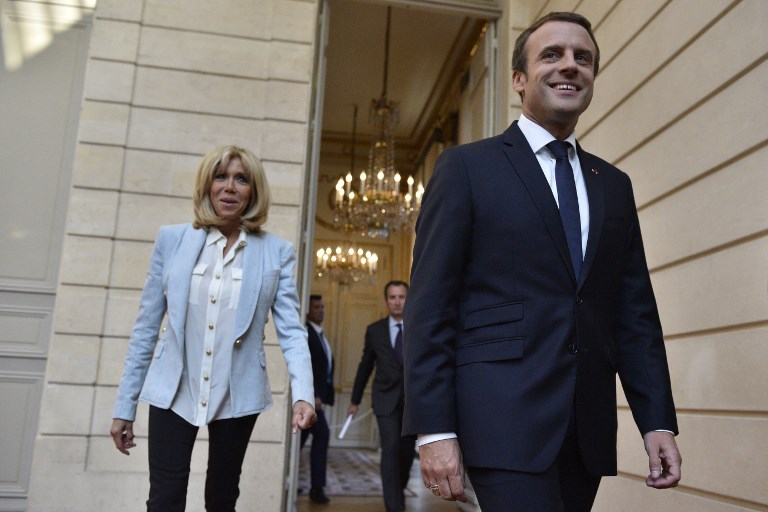 PARIS, France – French President Emmanuel Macron is preparing to backpedal on the issue of creating an official First Lady position for his wife in the face of attacks from left-wing opponents and a petition against the move, officials and reports said.

The newly elected 39-year-old president had promised in March on the campaign trail to create “a real status” for his wife Brigitte, who is his former schoolteacher.

The issue has become a new political headache for Macron after an online petition against creating the role garnered around 285,000 signatures and an opinion poll showed a majority of French people were also opposed.

The presidency will clarify Brigitte Macron’s position later this month or in early September, a member of her entourage said Tuesday, August 8, adding that there were would be no change to the constitution to create a First Lady position.

Government spokesman Christophe Castaner said in a tweet: “Brigitte Macron plays a role, has responsibilities. We want transparency and a framework for the means at her disposal.”

“The idea is for the French people to know how much this role costs,” Aurore Berge, a senior lawmaker from Macron’s Republic on the Move party, told Europe 1 radio on Tuesday.

The new status would have seen France copy the American tradition of a prominent public role for the First Lady. Neither country has ever had a female head of state.

The wife of the French president has historically always played a public role at official functions, welcoming heads of state or other VIPs at meetings or dinners.

She has a small security and secretarial staff paid for by the presidential budget, but she has no formal job title – like the partners of the British prime minister or German chancellor.

The focus on the First Lady proposition comes at a bad time for Macron as opinion polls show his popularity slipping badly only 3 months after the young centrist clinched a sensational victory in May.

One survey published last week showed just 36% of respondents held a positive view of him.

As well as pushing through cuts to public spending, parliament is also preparing to vote for a new ethics law this week which will prevent MPs from employing their partners or family members as assistants after a series of scandals.

“But I see that sometimes one can create a role for one’s partner,” opposition MP Ugo Bernalicis from the far-left France Unbowed party said sarcastically during a debate in late July.

He criticized the idea of according resources to Brigitte Macron “even though she has never been elected”.

Macron had always made clear that Brigitte would not be paid in the proposed role as First Lady, arguing that creating the position would make it more transparent.

“Paid by the Republic, no. Having a role, a real status, a real capacity to act, yes,” Macron said in March when asked about his vision for the future position.

Brigitte would “have the role that she’s always had. That’s to say that she is at my side because it balances me. We’ve always worked like that,” he added.

“She will have a role, she won’t be hidden because she’s part of my life,” he said.

Brigitte Macron, who at 64 is 25 years older than her husband, married her former pupil after they fell in love while writing a play together at school in their home town of Amiens, northern France.

Reports say she is preparing to take an active role supporting mental health and disabled charities.

The petition against her becoming First Lady was posted on the website change.org by a “painter-activist” Thierry Paul Valette and had 278,000 signatures at midday on Tuesday. – Rappler.com