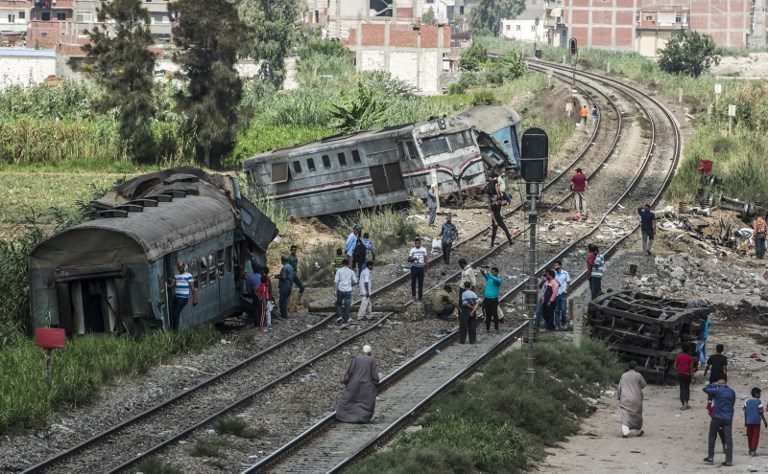 ALEXANDRIA, Egypt (UPDATED) – The death toll from Egypt’s latest train disaster rose to 40 as cranes worked on Saturday, August 12, to clear the stricken railway line between Cairo and the Mediterranean city of Alexandria.

The toll from Friday’s accident when two trains collided near Alexandria rose to 41 dead, the health ministry said on Saturday.

The accident also wounded 132 people, with 79 being discharged after treatment while 53 remained in hospital on Saturday, Health Minister Ahmed Emad el-Din Rady said in a statement.

A stream of ambulances ferried the injured, stretched out on the ground in a field alongside the railway tracks, to Alexandria hospitals.

Transport ministry officials, quoted on state television, have said the crash in farmland on the outskirts of Alexandria was probably caused by a malfunction in one train that brought it to a halt.

The other train then crashed into it.

One train had been heading to Alexandria from Cairo and the other from Port Said, east along the coast.

President Abdel Fattah al-Sisi has sent his condolences to the victims’ families and ordered a probe to “hold accountable” those responsible for the disaster.

It was the deadliest train accident in the country since a train ploughed into a bus carrying schoolchildren in November 2012, killing 47 people.

That accident jolted the government which ordered an investigation and sacked the transport minister and the head of the railway authority.

The accident was blamed on a train signal operator who fell asleep on the job.

Around a year later, a collision between a train and a bus killed 27 people south of the capital.

They had been returning from a wedding when the train ploughed into their bus and a truck at a railway crossing.

Egyptians have long complained that the government has failed to deal with chronic transport problems, with roads as poorly maintained as railway lines.

There have been many other fatal crashes on the busy rail network.

In July 2008, at least 44 people died near Marsa Matruh in northwestern Egypt when a runaway truck hurtled into a bus, a lorry and several cars waiting at a level crossing, shunting the vehicles into the path of a train.

At least 58 Egyptians were killed and 144 injured in August 2006 in a collision between two trains travelling on the same track.

In the wake of that crash, a court sentenced 14 railway employees to one year in prison for neglect.

The deadliest accident on Egypt’s railways dates back to 2002 when 373 people died when a fire ripped through a crowded train south of the capital. – Rappler.com