Kuwait says most of Gulf oil spill cleaned up

Aug 13, 2017 11:50 PM PHT
Agence France-Presse
Facebook Twitter Copy URL
Copied
Experts quoted by Kuwaiti media estimate that as many as 35,000 barrels of crude may have leaked into the waters off Al-Zour 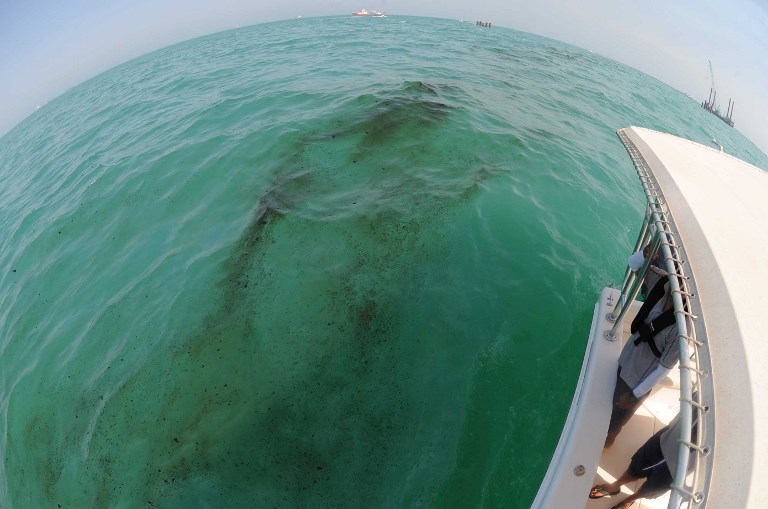 KUWAIT CITY, Kuwait – Emergency workers have managed to clean up “the major part” of an oil spill near the joint Kuwaiti-Saudi Al-Khafji oilfield in the Gulf, an official said on Sunday, August 13.

Teams were still working to clean other parts of the spill and coastal areas, he said.

Emergency teams have been battling the large oil spill since it appeared off the emirate’s southern coast on Thursday, August 10.

Sheikh Talal said precautionary measures have been taken around vital installations in Al-Zour area where a huge $30-billion oil complex including a 615,000-barrel-per-day refinery is being built.

There were no official reports about the source or size of the spill in the waters near the Al-Khafji field.

However, Kuwaiti media on Sunday quoted local oil experts as saying the spill originated from an old 50-kilometer (31-mile) pipeline from Al-Khafji.

The experts estimated that as many as 35,000 barrels of crude may have leaked into the waters off Al-Zour.

Emergency teams have sealed off two power and water desalination plants in the area to prevent contamination.

Kuwait depends largely on desalination for its fresh water supplies.

Saudi Arabia and Bahrain, located south of Kuwait along the Gulf coast, said slicks from the spill had not reached their waters.

Saudi Arabia, in a statement published by the official SPA news agency, said it had implemented a “crisis management plan” and was conducting an aerial survey of its oil installations along the coast.

OPEC member Kuwait pumps around 2.7 million barrels per day of crude oil, providing around 85% of its public revenues. – Rappler.com