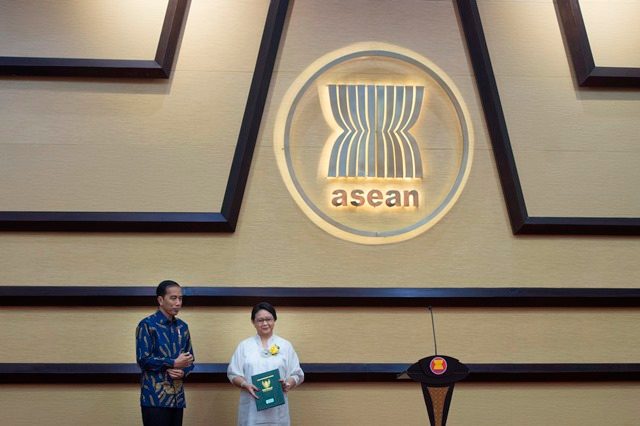 JAKARTA, Indonesia – Imagine being able to live abroad, work in other Southeast Asian countries, and make friends in the region outside of just your country.

This is something that has been made possible by the ASEAN Economic Community (AEC), but two years in, so few have taken advantage of this opportunity.

Although analysts predicted Indonesia would receive significant advantages from the AEC, the region’s largest country still has not shown significant results.

One of the major causes is the lack of socialization of its benefits to the community.

“People are often afraid of agreements made by governments with other countries because they do not fully understand,” Fina Astarina, ASEAN Studies Researcher from The Habibie Center, told Rappler.

The fear is increasing because of the lack of support and government attention, as is the case with the application of Mutual Recognition Agreements (MRA).

The ASEAN website describes the ASEAN MRAs as “framework arrangements established in support of liberalizing and facilitating trade in services.”

“MRAs aim to facilitate mobility of professionals or skilled labor in ASEAN. Through exchange of information, MRAs also work towards the adoption of best practices on standards and qualifications,” it said.

Back in 2015, when the program was first delivered, labor groups that were hit by the issue of illegal foreign workers rejected the proposal.

Up until May 2016, huge protests addressing illegal workers still made its way onto Indonesian streets. Labor organizations urged the government to prohibit foreign workers in non-skilled sectors, even though there never was any plans to integrate on those sectors.

These events were in line with a survey in 2015, where 82% of Indonesia citizens stated they do not understand what the AEC is.

Has the situation improved since then?

The good news is the shortcomings and obstacles of the program can actually be fixed with proper information dissemination and government support. The bad news? Because of lack of these, ignorance and fear are widespread.

But Indonesians fear rather than embrace this opportunity, fearing that foreign workers would take over their jobs.

Astarina assured that the implementation of the MRA is unlikely to significantly increase the number of foreign professionals from other ASEAN countries in Indonesia. She further added that “of the 8 professions, Indonesian workers in engineering and accounting hold the most certificates but have not been exploited by [MRAs].”

This shows that the influx of foreign workers in Indonesia is not because there is a lack of local workers, but rather the lack of knowledge and willingness of Indonesian workers to utilize the MRA.

Additionally, these programs that were originally formed for the purpose of simplification, are still far from smooth – with complex application processes.

Astarina assured that the initial fear is natural. She also said that the fact that the benefits have still not been felt is also not unusual.

Aside from still being in the exploratory period, data reveals that the 8 professions facilitated in the MRA, account for only 1.5% of the total number of Indonesian workers.

“Coupled with the lack of awareness of certified labor to utilize the work, it is natural that Indonesia still has not felt the benefits of the EAC,” she explained.

What has the government done so far?

Khairul Anwar, Director General of Guidance, Training and Productivity of the Ministry of Manpower and Transmigration, said that he has conducted seminars and explanations on how the AEC works since 2014.

“The Indonesian government has issued several policies that are cross-cutting and pay special attention to improving competitiveness,” he told Rappler.

The government is also aggressively conducting certification programs in order to meet international and ASEAN standards. The focus is training to foster workers in terms of ability, behavior, and mastery of foreign languages.

Language problems are often the weak points of Indonesian workers. For example, Filipino caregivers are more desirable than Indonesians because they can speak English more fluently, since it is the language of instruction in many Philippine schools.

Khairul also warned the public from misconceptions and spreading false beliefs on the AEC, before truly understanding the issue.

“Do not be easily affected by the wrong issue,” he said referring to concerns on decreased employment opportunities for Indonesian workers. But much work has yet to be done.

Astarina stressed that workers should be encouraged and given incentives to take advantage of existing opportunities from the MRA implementation. She highlighted the importance of providing complete information by the government to the workers in Indonesia.

The goal should not just be to spread information to prepare the Indonesian workforce, but also to open the minds of the workers to be able to see the AEC not as a threat, but also an opportunity for Indonesians to work in other ASEAN countries.

Two years in, evaluations and improvements are thus needed from various governments – so they can assess their respective work force and to make their systems easier.

The Indonesian government for instance, is required to make a clearer and stricter regulatory system so that the presence of foreign workers does not threaten the labor market in Indonesia.

Additionally, the most important and urgent thing to do is increase the ability of human resources in order to have competitiveness.

Education, she said, is also critical.

Astarina revealed that 47.37% of 127.8 million Indonesian workers are elementary school graduates, while only 6.7% have achieved a graduate degree. The numbers are small given that in the 8 professions approved by the MRAs, most of the workers need a bachelor’s degree and certification.

Thus, the government is required to be able to improve the quality of education that will produce good quality workers. “The existing education system must be able to form a person ready to work and compete. In addition, the mastery of foreign languages, especially English and technology mastery must also be owned by the workforce so that we can compete in the country or in other ASEAN countries,” said Astarina.

Astarina said indeed, a free market system like AEC will bring up inevitable negative impacts. But she said it is necessary to put in place preventive actions through preparation and socialization, in order to reduce the adverse effects of the AEC and provide more benefits.

“This is not only the responsibility of the government, but also other parties such as academia and NGOs, to inform the public about the advantages and disadvantages – of course, followed by solutions – from the partnership,” she said. – Rappler.com

This story was produced under the Reporting ASEAN fellowship of IPS Asia-Pacific in cooperation with the Probe Media Foundation. This program is supported by the Rockefeller Foundation, the ASEAN Foundation and the Japan-ASEAN Solidarity Fund.