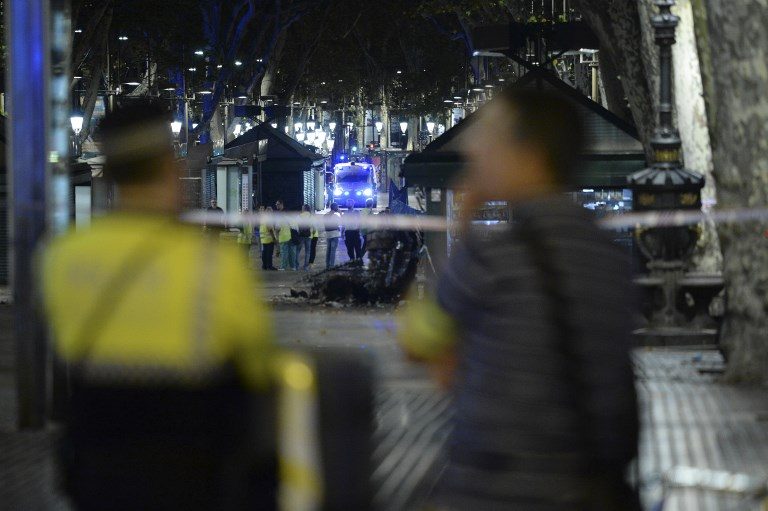 The Spanish royal family issued an unusually strongly-worded statement: They are assassins, criminals who won’t terrorize us. All of Spain is Barcelona.”

FC Barcelona said it was “deeply saddened” by the tragedy and the team’s talismanic striker Lionel Messi said separately that people must reject “any act of violence”.

“There are many more of us who want to live in a world in peace, without hate and where respect and tolerance are the basis of coexistence,” he added.

President Donald Trump tweeted: “The United States condemns the terror attack in Barcelona, Spain, and will do whatever is necessary to help. Be tough & strong, we love you!”

Secretary of State Rex Tillerson added: “Terrorists around the world should know – the United States and our allies are resolved to find you and bring you to justice.”

In a statement, the office of German Chancellor Angela Merkel said they were thinking of the victims of the “revolting attack” with “profound sadness”.

President Vladimir Putin called for the world to unite in an “uncompromising battle against the forces of terror”.

“We decisively condemn this cruel and cynical crime against civilians,” Putin wrote in a telegram of condolences to Spanish King Felipe VI.

A spokesman said UN Secretary General Antonio Guterres “condemns today’s terrorist attack on Barcelona” and “hopes that those responsible for this heinous violence will be swiftly brought to justice.”

European Commission President Jean-Claude Juncker said: “I send my deepest condolences to the families and loved ones of the victims, as well as to Prime Minister Rajoy and the people of Spain. My thoughts are with the people of Barcelona.”

Paris Mayor Anne Hidalgo said: “Parisians are at your side. Barcelona and Paris are cities that share love and tolerance. Our values are much stronger than this heinous and cowardly act of terrorism”.

British Prime Minister Theresa May tweeted: “My thoughts are with the victims of today’s terrible attack in Barcelona … and the emergency services responding to this ongoing incident. The UK stands with Spain against terror.”

It was a “cowardly attack against innocent people,” Prime Minister Mark Rutte said in a statement on his Facebook page, calling it a “black day at a place where many people around the world gathered.”

Pope Francis’s spokesman said in a statement: “The Pope prays for the victims of this attack and wishes to express his closeness to all the Spanish people, especially the wounded and families of the victims.”

Footballer Cristiano Ronaldo, a star with Spanish premier club Real Madrid, said he was “dismayed” by the attack and voiced “support and solidarity with the families and friends of the victims”. – Rappler.com