For Trump, a complicated return to a White House in disarray 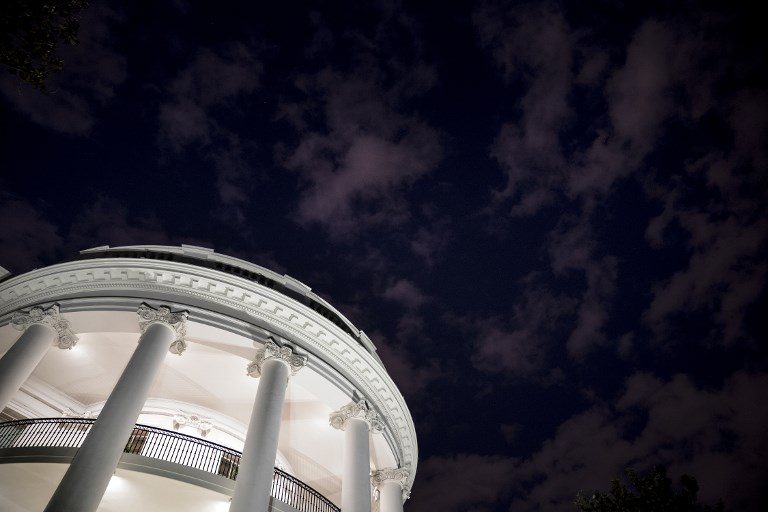 Facebook Twitter Copy URL
Copied
Far from striking a more unifying tone, Trump's words and actions continue to feed the sense of a rudderless presidency, lurching from one self-generated crisis to the next

WASHINGTON DC, USA – US President Donald Trump returns to the Oval Office Monday, August 21, after a two-week vacation rife with chaos – and the dark clouds plaguing his fledgling presidency show no signs of clearing up.

Seven months after taking office the real estate magnate’s approval rating has plunged to a record low. And far from striking a more unifying tone, Trump’s words and actions continue to feed the sense of a rudderless presidency, lurching from one self-generated crisis to the next.

In perhaps the worst to date, he dealt a crushing blow to his own embattled administration by saying “both sides” were to blame for the bloodshed in Charlottesville, Virginia following a rally by neo-Nazis and white supremacists.

Al Gore, a former Democratic vice president, advised Trump to “resign.” Mitt Romney, a recent Republican presidential nominee, urged the president to “acknowledge that he was wrong” and “apologize.”

Parts of the business world are now openly voicing exasperation with Trump, as members of his own Republican party – long “off the record” – grow more audible and assertive.

“The president has not yet been able to demonstrate the stability nor some of the competence that he needs to demonstrate in order to be successful,” Republican Senator Bob Corker uttered in one chiseled phrase, capturing the growing sentiment that Trump’s unpredictability cannot sustain his four-year presidential term.

With his return to Washington, number one on the president’s to-do list is tax reform.

Delivering on that campaign promise would mark Trump’s first significant legislative achievement since his January swearing-in.

His verbal attacks on top members of Congress have cooled relations between the White House and Capitol Hill, but lawmakers with next year’s midterm elections on the mind also fear an open clash.

Top Republican lawmakers Paul Ryan and Mitch McConnell “recognize Trump for what he is, and there’s no love lost,” said Larry Sabato, a politics professor at the University of Virginia.

“But they have to protect their members on the ballot in November 2018,” he told Agence France-Presse.

“They have no choice but to work with Trump, and Trump knows that and enjoys playing with them as a cat would a cornered mouse.”

A nation on edge

Friday’s (August 18) ouster of Steve Bannon, Trump’s controversial former chief strategist and key campaign ally, from the White House could be seen as a turning point for an administration in turmoil.

But the timing was disastrous, capping one of Trump’s most catastrophic weeks yet after his series of ambiguous remarks on the white supremacist rally in Charlottesville, which ended with the death of a counter-protestor at the hands of a suspected Nazi sympathizer.

Bannon’s departure does offer a semblance of clarity concerning the balance of power in the White House, where John Kelly, a retired Marine general, now reigns as the president’s chief of staff.

But the president’s true agenda remains unclear, and Bannon’s status change from White House power player to outsider has policy experts asking what will remain in the administration of his extreme anti-establishment views.

The 45th US president will have an opportunity on Tuesday, August 22, to set the tone for his return from holiday at a Phoenix, Arizona rally, which could potentially play out in a tense climate.

The city’s Democratic mayor, Greg Stanton, urged the president to delay the campaign-style rally considering that “our nation is still healing from the tragic events in Charlottesville.”

Local officials fear Trump will take advantage of being surrounded by his supporters to grant a pardon to Joe Arpaio, a former sheriff and deeply divisive figure known for his strong-arm methods and zeal against unauthorized immigrants.

He was recently convicted for criminal contempt of court.

“If President Trump is coming to Phoenix to announce a pardon for former Sheriff Joe Arpaio, then it will be clear that his true intent is to enflame emotions and further divide our nation,” Stanton said in a statement.

The increasingly isolated Trump will have to strike the right balance between arousing cheers from his base, a task at which the former reality TV star excels, and sending a message of unity after a week that rattled a nation already on edge – and perhaps permanently stained his presidency. – Rappler.com