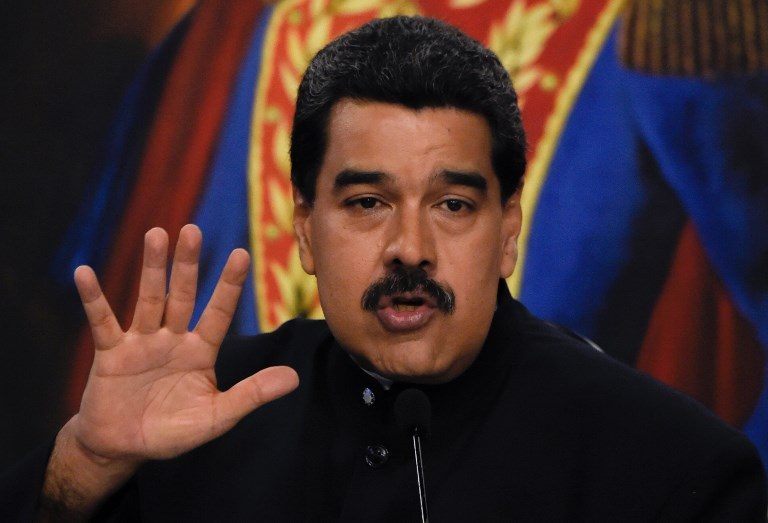 Facebook Twitter Copy URL
Copied
Venezuelan President Nicolas Maduro urges the military to 'be prepared to fight fiercely... in the face of an eventual' US invasion

CARACAS, Venezuela – Venezuelan President Nicolas Maduro on Thursday, August 24, warned the armed forces in his crisis-hit country against “fissures” in their ranks, ahead of war games seen as a show of strength after US President Donald Trump’s threat of military action.

Maduro launched the warning in a speech to his top military leadership, including General Vladimir Padrino, his defense minister, and General Remigio Ceballos, commander of operational strategy, two days before the drills begin Saturday, August 26.

“We must be clear, especially for the youth in the military, that we must close ranks within the homeland – that this is no time for any fissures and that those with doubts should leave the armed forces immediately,” Maduro said.

“You are with Trump and the imperialists, or you are with the Bolivarian national armed forces and the homeland,” he added. “Never before has Venezuela been threatened in such a way.”

Maduro has faced months of deadly mass protests by opponents who blame him for an economic crisis and are demanding elections to replace him. His main source of support is the military.

Venezuela’s opposition has repeatedly urged the military to abandon Maduro, so far to no avail. He has only faced low-level dissent, such as from the two rebel officers who staged a raid on an army base this month.

Maduro urged the military to “be prepared to fight fiercely… in the face of an eventual” US invasion.

“They treat us as a dictatorship,” said the embattled president.

Since Trump’s threat, Vice President Mike Pence sought to soften the message, saying during a visit to Latin America that he was sure democracy could be restored in Venezuela through economic and diplomatic pressure.

In another move made with an eye on Washington, Maduro announced he had moved his oil minister Nelson Martinez over to run the state oil giant PDVSA – and brought the company’s boss Eulogio Del Pino over to be his oil minister.

Maduro told the military leaders that in the face of possible future added US sanctions on Venezuela, “I decided to do some re-casting… we have to prepare ourselves.”

He pointed out that Del Pino, who has been at the helm of PDVSA since 2014, was the architect of agreements between OPEC and non-OPEC countries to boost flagging crude prices.

As for Martinez, who took over the oil ministry in January, Maduro said he would work to increase Chinese, Russian, Indian and Malaysian investments in PDVSA’s various projects.

“We are in a moment of flexibility to face the economic war,” said Maduro.

So far, the United States has applied economic sanctions directly targeting Maduro, who says the economic collapse that has dragged his country into crisis is a US-backed conspiracy.

He has accused Washington of preparing fresh economic sanctions and a “naval blockade” to stifle oil exports, which account for nearly all of Venezuela’s hard currency reserves.

The fall in world crude prices has left Venezuela – which has the largest proven oil reserves in the world – short of dollars for vital imports. The country is suffering from shortages of basic goods and medicines.

Earlier this month, PDVSA reported a sharp 33.5% drop in revenues for 2016, as compared with the previous year.

The opposition blames Maduro’s economic management for the crisis, and his critics accuse him of clinging to power by hijacking state institutions, such as by installing a new constituent assembly packed with loyalists.

Clashes between anti-government protesters and police this year have left 125 people dead, according to prosecutors.

Caracas is angry at Bogota for offering protection to Maduro’s onetime attorney general Luisa Ortega, who is now a fierce critic of his government. – Rappler.com