Fugitive Thai ex-PM Yingluck ‘may be in Dubai’ – party source 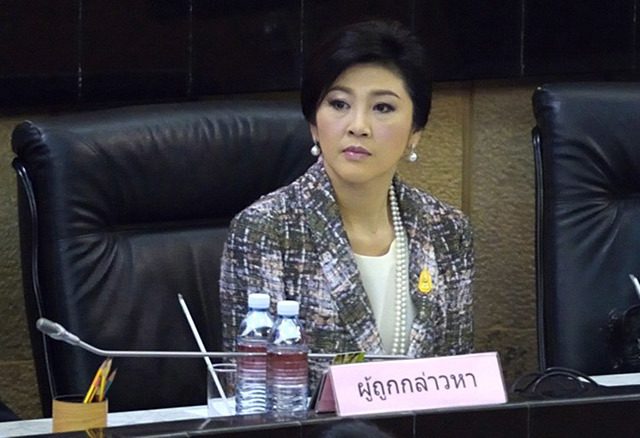 BANGKOK, Thailand – Former Thai prime minister Yingluck Shinawatra may have fled to Dubai, a senior party source told Agence France-Presse, Saturday, August 25, after slipping out of the country to avoid a court ruling in an escape act that stunned many Thais.

Yingluck, 50, was on Friday morning, August 24, due to arrive at the Supreme Court for the ruling in her trial for criminal negligence that could have seen her jailed for 10 years.

But she did not show up, catching many flat-footed as she wrote a dramatic closing chapter to the 16-year political saga of her mega-rich Shinawatra family. (READ: Thai ex-PM Yingluck defiant as verdict looms)

The political dynasty emerged in 2001 with a series of groundbreaking pro-poor welfare schemes that won them elections but rattled Thailand’s royalist, army-aligned elite, who battered Shinawatra governments with coups, court cases and protests.

Yingluck’s government was toppled by a coup in 2014 and she was put on trial over negligence linked to a costly rice subsidy that propped up her rural political base.

The Pheu Thai party source, who requested anonymity, confirmed Yingluck had fled the country a few days before the ruling and “may be in Dubai”.

Family patriarch Thaksin, Yingluck’s elder brother, has been based partly in Dubai since he fled Thailand in 2008 to avoid jail for a corruption conviction. He was toppled from power by a 2006 coup.

Many newspapers reported that she fled through a land border to Cambodia, flew to Singapore and on to Dubai, perhaps two days before her court date.

It was a disappearing act that appeared to surprise even her family – an elder brother and sister waited at the court for her arrival alongside thousands of supporters. (READ: Thai ex-PM Yingluck has fled Thailand – party source)

Shinawatra loyalists expressed sympathy with her shock move, saying the ruling would have been predetermined as her case was politically motivated.

“If she has fled abroad it is because this set of judges are appointed by the military and do not come from a democratic system,” Surachet Chaikosol, 59, a ‘Red Shirt’ activist told AFP.

“I am glad she will not suffer in jail.”

Thai junta chief Prayut Chan-O-Cha on Friday denied knowledge of Yingluck’s whereabouts and expressed surprise at her no-show “as she always insisted that she would fight the case.”

The junta, police and her political network remained tight-lipped on Saturday about the details of her flight and the likelihood of a possible deal to allow her to leave.

Analysts say Yingluck, who was closely monitored by Thai security services, most likely cut a deal to exit the country.

Flight avoids her being jailed under a Thai junta that pressed for her trial and diminishes the possibility of pro-Shinawatra protests.

The military is desperate to avoid instability as it digs in for a long stay in Thai politics.

The Supreme Court will deliver its ruling in absentia on September 27.– Rappler.com