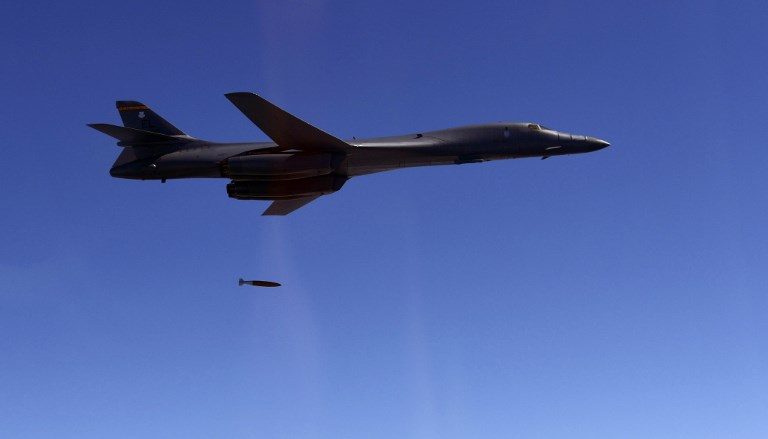 US and South Korean aircraft dropped live munitions onto the Pilseung shooting range in Gangwon province, some 150 kilometers (94 miles) south of the Demilitarized Zone dividing the two Koreas.

General Terrence O’Shaughnessy, commander of the US Pacific Air Forces, said in a statement that the exercise meant to signal solidarity between the air forces of the 3 countries.

“North Korea’s actions are a threat to our allies, partners and homeland, and their destabilizing actions will be met accordingly,” he said.

“Our forward-deployed force will be the first to the fight, ready to deliver a lethal response at a moment’s notice if our nation calls.”

North Korea sparked fresh concerns over its nuclear and missile program Tuesday, August 29, when it launched a Hwasong-12 intermediate range missile over Hokkaido and into the central Pacific, sparking emergency sirens and text alerts sent en masse to people in northern Japan.

The launch came as US and South Korean forces were nearing the end of the 10-day annual Ulchi Freedom Guardian joint exercises, which Pyongyang regards as threatening.

The North’s state media called the Hwasong-12 test “a part of the muscle-flexing” against the war games. And leader Kim Jong-Un called for more launches into the Pacific, KCNA news agency said.

The UN Security Council denounced North Korea’s latest missile test, unanimously demanding that Pyongyang halt the program. US Defense Secretary Jim Mattis called the IRBM test a “reckless and provocative act” while President Donald Trump said it demonstrated that negotiations with Pyongyang were “not the answer.”

But with tensions surging, Mattis also said that there was still room for diplomacy. Speaking on Thursday, the US defense chief stressed that, contrary to reports, there was no divergence of views among top US officials over the appropriate response to Pyongyang.

“I agree with the president… We should not be talking right now to a nation that’s firing missiles over the top of Japan, an ally,” he said at the Pentagon.

“We’re working diplomatically with Secretary (of State Rex) Tillerson in the lead, and I maintain behind that military options for the president, to back up the diplomacy.”

Asked why there was no defensive military action taken over the launch, Mattis suggested that US and Japanese forces almost immediately knew the missile, which landed far out into the Pacific Ocean, was not targeted at anyone.

“We knew within minutes where it was going,” he said.

The Pentagon chief declined to confirm reports that North Korea could be preparing a new nuclear test, which would be widely seen as another provocative and dangerous move by the Pyongyang regime.

However, he added, “they could do something like that on relatively short notice”.

The escalation in tensions between the two sides brought expressions of worry from other countries in the region.

On Wednesday, August 30, Russian Foreign Minister Sergei Lavrov urged Washington not to use force against North Korea. In a phone call with Tillerson, Lavrov “underscored… the need to refrain from any military steps that could have unpredictable consequences,” the foreign ministry in Moscow said.

“Once again we call all the involved sides to urgently start establishing dialogue without preconditions, based on the proposals on the Russian and Chinese road map,” Zakharova said.

Meanwhile British Prime Minister Theresa May attended a meeting of Japan’s National Security Council in Tokyo Thursday and visited a US naval base near the capital, stressing Brtiain’s security cooperation with Japan.

She said London and Tokyo would work together to pressure North Korea “including by increasing the pace of sanctions” against Pyongyang after its “outrageous” firing of a missile. – Rappler.com