Toll in Mexico earthquake rises to at least 32 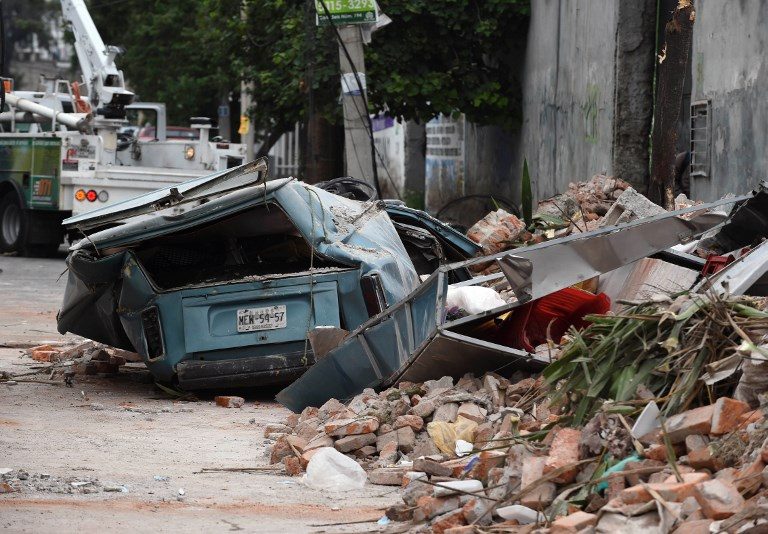 Facebook Twitter Copy URL
Copied
(7th UPDATE) It is the strongest to hit quake-prone Mexico at least since 1985, when an 8.1-magnitude earthquake in Mexico City killed more than 10,000 people

MEXICO CITY, Mexico (7th UPDATE) – Mexico was severely jolted overnight by its most powerful earthquake in a century, which killed at least 32 people as it struck the Pacific coast, officials said Friday, September 8.

President Enrique Pena Nieto described the 8.2 magnitude quake as “a major earthquake in scale and magnitude, the strongest in the past 100 years.”

The southeastern Pacific coast states of Oaxaca and Chiapas appeared to have borne the brunt of the damage, with 23 people killed in Oaxaca alone, Governor Alejandro Murat said.

The worst destruction appeared to be in Juchitan, in the state of Oaxaca, where 17 people were confirmed dead, according to the head of the emergency response agency, Ricardo de la Cruz.

Officials said the death toll there could rise.

“There are houses that collapsed with people inside,” Luis Felipe Puente, the agency’s director general, told TV news channel Milenio.

A hotel also collapsed in Juchitan, the town hall partly caved in and many homes were badly damaged.

One was crushed by a collapsing wall. The other, an infant on a respirator, died after the quake triggered a power outage.

The quake epicenter was about 100 kilometers (60 miles) from the coastal town of Tonala, in far southern Chiapas state, and hit at 11:49 pm Thursday (0449 GMT Friday), Mexico’s seismologic service said.

The US Geological Survey put the magnitude slightly lower, at 8.1. That is the same as a devastating 1985 earthquake that killed more than 10,000 people in Mexico City – the country’s most destructive ever.

The quake shook a large swath of the country and was felt as far north as Mexico City — some 800 kilometers from the epicenter — where people fled their homes after hearing sirens go off as buildings trembled and swayed.

Many were in their night clothes. Some carried babies and pets in their arms as they stumbled onto the streets.

“Not another one. God, please no,” said one woman, falling to her knees to pray.

“I was driving when the ground started to shake. The car was wobbling,” said Cristian Rodriguez, a 28-year-old Uber driver in Mexico City.

Onelia Guerra, an anxious Oaxaca local who was in the capital Mexico City, was taking a plane back to home to check on her family.

“My father and my 14-year-old son are alone there,” she told AFP.

The quake occurred as Mexican authorities were bracing for the impact of Hurricane Katia, which strengthened to a Category Two storm as it rumbled towards the state of Veracruz on the Gulf coast.

It is one of three active hurricanes in the Atlantic Ocean alongside Irma and Jose.

Mexico is particularly vulnerable to hurricanes, given its location and its Pacific and Atlantic coastlines, and is hit by a least a dozen weather events a year. Speaking from the National Disaster Prevention Center’s headquarters, where he was supervising the emergency response, Pena Nieto said 50 million of Mexico’s 120 million people felt the quake.

It was also felt in much of Guatemala, which borders Chiapas.

Mexican officials ordered schools to remain closed Friday in 11 states, including Mexico City, so they could inspect for structural damage.

The quake struck at a depth of 69.7 kilometers, according to the USGS.

Initially, authorities issued a tsunami alert for a huge stretch of coastline starting in central Mexico and spanning Central America all the way down to Ecuador.

It was later lifted, but Mexico remained on alert for aftershocks.

The Pacific Tsunami Warning Center had originally said a tsunami of more than 3 meters (10 feet) was possible.

In the end, the quake caused rough seas but no tsunami, officials said.

Since the 1985 earthquake, Mexican authorities have instituted a stricter building code and developed an alert system using sensors placed on the coasts.

Mexico sits atop five tectonic plates, whose movement makes it one of the most seismically active countries in the world. – Rappler.com