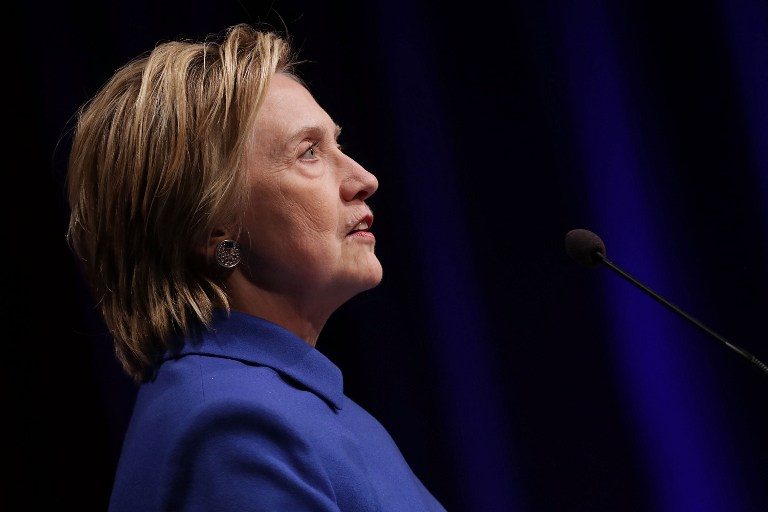 Facebook Twitter Copy URL
Copied
Ahead of the release of her campaign memoir, the defeated US presidential bet also says she is 'done with being a candidate'

WASHINGTON, USA – Hillary Clinton says she is “done” being a political candidate, and that her shock US presidential loss last year to Donald Trump remains a source of deep anguish.

“It still is very painful. It hurts a lot,” the 2016 Democratic nominee said in an interview on CBS Sunday Morning, the first in a series of appearances to highlight the upcoming publication of “What Happened,” her memoir about the campaign.

“I am done with being a candidate,” she said. “As an active politician, it’s over.”

If true, Clinton is closing the door on a storied political career that saw her become the first woman presidential nominee of a major US political party.

She also served 8 years representing New York in the Senate, and 8 years as US first lady.

The former secretary of state, who is 69, has teased out several excerpts from her book ahead of its release on Tuesday, September 12.

In those, she takes responsibility for her devastating loss to Trump. But she also blames Russian election interference, and extraordinary decisions by then-FBI director James Comey to reopen an investigation into her emails.

Sunday’s interview, conducted in Clinton’s home outside New York City, showed the former nominee apparently still uncomfortable with what happened in last year’s election – and admitting she was unprepared for the conditions in the United States that led to Trump’s victory.

“The forces that were at work in 2016 were unlike anything that I’ve ever seen or read about,” she said. “It was a perfect storm.”

Trump, she acknowledged, was an expert at tapping into the anger and frustration that pulsed through the American electorate in the aftermath of the financial crisis of 2007 and 2008.

While the New York real estate mogul was busy “referencing a nostalgia that would give hope, comfort [and] settle grievances” for millions of Americans, Clinton said she was seeking to offer answers to that resentment, not fan the flames.

“A lot of people didn’t want to hear my plans. They wanted me to share their anger. And I should’ve done a better job of demonstrating I get it,” she said.

She also could have done better with her use of emails, which blew into a crisis when it was revealed that she had sent and received thousands of emails on a personal account and server while she was America’s top diplomat.

“Oh, I think the most important of the mistakes I made was using personal email,” she told CBS.

Clinton also recalled her head-spinning distress on election night and the following morning, when giving her concession speech felt like “an out-of-body experience,” she said.

“I just felt this enormous letdown, just kind of loss of feeling and direction and sadness.”

She slid into “a frenzy of closet cleaning,” long walks in the woods, yoga, and “my share of chardonnay,” she said.

“It was a very hard transition,” she admitted. “I really struggled. I couldn’t feel, I couldn’t think. I was just gobsmacked, wiped out.” – Rappler.com