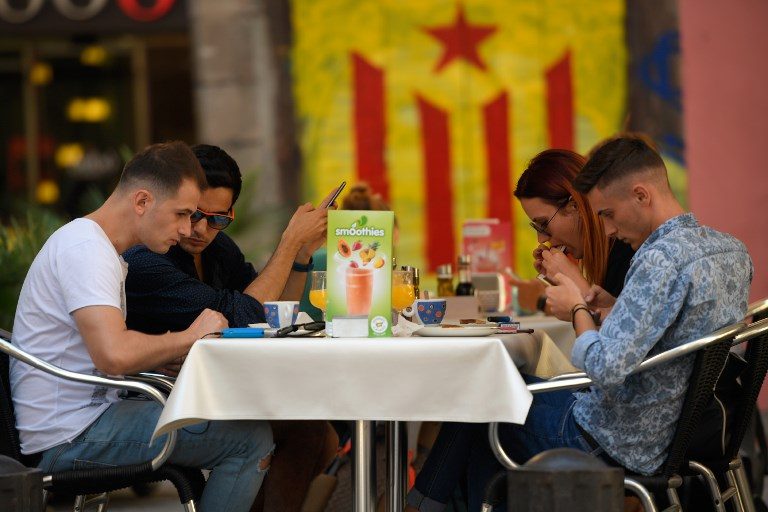 Facebook Twitter Copy URL
Copied
(UPDATED) Catalan President Carles Puigdemont and other separatist leaders march into a bullring in the port of Tarragona, and announce the official start of the campaign

TARRAGONA, Spain (UPDATED) – Catalan separatists launched their campaign Thursday, September 14, for a banned independence referendum in front of thousands of cheering supporters, despite growing pressure in Madrid to stop the vote at all cost.

To shouts of “Independence,” “We will vote” and “We’re not afraid”, Catalan President Carles Puigdemont and other separatist leaders marched into a bullring in the port of Tarragona, and announced the official start of the campaign.

“Tell all those who doubt, that on October 1 they will face a very simple decision: don’t opt for those who want to keep us in the dark, go out on the streets, take a ballot of which there will many,” he told a crowd of some 8,000 supporters.

“Vote, and in so doing bring light to darkness that has lasted for too many years.”

Hundreds of supporters were left outside the ring, unable to get in, but among them critics like Josep Enric Sabate, a 44-year-old real estate entrepreneur, also came for a look.

“This isn’t a government for all Catalans,” he told Agence France-Presse (AFP).

“This isn’t for real, only supporters of independence will go vote, they will win and who knows what will happen after.”

The pro-independence camp has two weeks to fire up its base and win over critics who are reluctant to take part in the referendum.

In July, a poll commissioned by the regional government found that 49.4% of Catalans were against independence while 41.1 supported it. More than 70%, though, wanted a referendum to settle the matter.

If they win, the separatists vow to declare independence within days for the wealthy northeastern region of Spain, with its capital Barcelona, home to around 7.5 million people.

The Catalan government has not established a minimum participation for the outcome of the referendum to be valid but a high turnout is key for the legitimacy of the vote.

Pro-separatists are a minority in Tarragona, the capital of a province with a population of around 130,000, and several chemical and oil refineries.

The city’s Socialist mayor, Josep Felix Ballesteros, has refused to provide facilities for the referendum.

Parties that oppose secession will not take part in the campaign for the vote, which was declared illegal by Spain’s Constitutional Court, and have asked their supporters to boycott it.

Carles Ruiz, the Socialist mayor of Viladecans, a town of 65,000 residents, denounced “pressure” on those mayors who refuse to participate on social media or in person.

“Some post photos of the mayors or of their homes,” he told AFP.

During the campaign launch, independence supporters called for Tarragona’s Ballesteros to resign.

The pro-separatist camp argues that a referendum represents their right to self-determination and has criticized what they see as heavy-handed measures by Madrid to stop the vote.

“The attitude of the state is so aggressive that no democrat can remain indifferent,” Ramon Pique, the coordinator of the campaign of the Catalan National Assembly, an influential pro-independence citizens group, told AFP.

Spanish state institutions are ratcheting up pressure almost daily on Catalan officials to stop the referendum.

Spain’s public prosecutor has ordered a criminal probe of the over 700 Catalan mayors who have so far agreed to help stage the referendum and threatened to arrest them if they do not turn up for questioning in court.

On Thursday, she tweeted that people would be allowed to vote “without putting institutions or public workers at risk,” without detailing how this would actually happen.

Prosecutors have also ordered police to seize ballot boxes, election flyers and any other item that could be used in the referendum and launched an official complaint against Puigdemont and other top Catalan officials over their referendum plans.

Against this backdrop several Catalan newspapers have declined to run advertisements for the “Yes” side, and Catalonia’s public television channel did not run a live broadcast of the campaign event.

Authorities had warned organizers of the event that the act was illegal, but took no measures to prevent it from going ahead. – Rappler.com