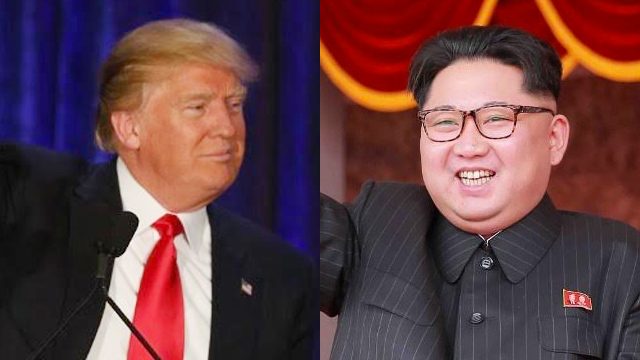 Facebook Twitter Copy URL
Copied
'If we get into a war it's because of misperception,' says Robert Kelly, professor of political science at Pusan National University

SEOUL, South Korea – Donald Trump may have stumbled into dangerous new territory with tweets that North Korea interpreted as a declaration of war, alarming a region used to living on the edge but now seriously considering the possibility of conflict.

Observers say the US president’s fondness for Twitter diplomacy is creating a situation ripe for dangerous misunderstandings as he pursues an increasingly personal row with Kim Jong-Un.

Trump’s tweet that the Pyongyang regime “won’t be around much longer” elicited alarm from North Korea, with its foreign minister saying the US had “declared a war.”

Although the White House dismissed this reading as “absurd”, the damage may have been done – North Korea takes a very dim view of what it perceives as threats against its leadership.

“If we get into a war it’s because of misperception,” said Robert Kelly, professor of political science at Pusan National University.

“In the real world there is no need to have conflict.”

Pyongyang’s missile program has stepped up a gear with two of its most recent launches sailing over a nervous Japan.

This month it conducted its largest ever nuclear test – what it claimed was a hydrogen bomb.

In the wake of the nuclear test, academics in China began openly calling for a reassessment of Beijing’s long-term policy of support for North Korea.

Pyongyang has “largely ignored China’s efforts” to resolve the situation with dialogue, said Jia Qingguo of Peking University, in an article entitled “Time to prepare for the worst in North Korea.”

The commentary, the first of several from Chinese academics in what some observers see as a sharp warning to Kim, urged Beijing to consider contingency talks with Washington and Seoul.

“When war becomes a real possibility, China must be prepared,” the article said.

The more hopeful interpretation of Trump’s tweeting, said Kelly, is that Kim is not the target at all; rather it is intended to persuade China to “stop looking the other way.”

Beijing has traditionally provided an economic lifeline to its isolated neighbor, fearful of the destabilizing consequences of regime collapse or conflict.

But after the latest nuclear test, it signed up to tough new sanctions, including potentially damaging restrictions on crude oil, aimed at squeezing Pyongyang.

Even so, Trump continues to poke the hornet’s nest, either unaware of, or maybe in spite of, Pyongyang’s growing outrage.

With few of the normal contacts that grease the wheels of interaction between two countries — no embassies, infrequent chances for diplomats to meet — the US and North Korea often conduct their relationship in full public view.

“The US and North Korea don’t want to drive this to a military conflict but if this psychological warfare persists, one side could unintentionally cross the red line which will prompt the other to launch a counteraction, leading to an armed clash,” he said.

Those actions and counteractions are already starting to play out.

A hint late last week that Pyongyang might respond to Trump’s insults with an atmospheric nuclear test raises the stakes – and the chance of miscalculation – next time the regime fires a missile, say analysts.

For South Korea and Japan – both home to tens of thousands of US troops, and both likely targets of any North Korean attack – the specter of a conflict is rattling nerves.

In densely-populated Seoul, which lies within mortar range of the heavily-fortified border, war preparations have become a familiar part of life.

Subway stations double as fallout shelters, complete with rows of gas masks, and the country conducts emergency drills to role play a North Korean attack about four times a year.

Across the water, Japan frets over not just ballistic missiles that could be carrying chemical, biological or nuclear payloads, but also about the risk of “electromagnetic-pulse (EMP) attacks” that could knock out the country’s electronics infrastructure.

Defence Minister Itsunori Onodera, who has just bagged his department a bumper budget settlement, told a press conference earlier this month that Japan thinks “it is important to enhance survivability against EMP weapons.”

The Japanese government has in place a tried-and-tested alert system — text messages, loudspeaker alerts — for when missiles are launched over the country.

However, with only minutes to react, many Japanese feel a sense of helplessness against the possibility of an attack.

In the end, says Pusan National University’s Kelly, if the rhetoric is dialled down, and Trump steps away from the keyboard, the uneasy detente that has defined northeast Asia for the last few decades could return – but with one major adjustment.

“We learned to live with Soviet, Maoist Chinese, and Pakistani nuclear weapons,” he said. “We can adapt to North Korean nukes as well.”  – Rappler.com