Oct 1, 2017 9:47 AM PHT
Agence France-Presse
Facebook Twitter Copy URL
Copied
From Trump's perspective, the most significant case would result in a validation of his decrees limiting immigration, which have faced repeated setbacks in lower courts 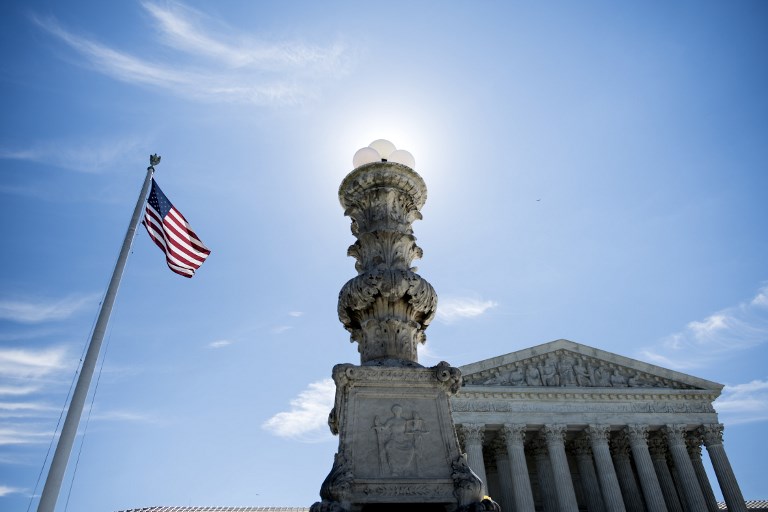 WASHINGTON DC, USA – The US Supreme Court on Monday, October 2, opens its 2017-2018 session, facing thorny issues that include gay and labor rights, voter restrictions and limits on gathering private information.

On many of these issues the Republican administration of President Donald Trump has taken the exact opposite position from that of the previous Democratic administration under Barack Obama.

Unlike in its last session, when the 9-justice court operated with a four-four ideological split with one seat vacant, Trump can now count on Justice Neil Gorsuch, a firm conservative vote who in April took over the position created by the death of Justice Antonin Scalia.

From Trump’s perspective, the most significant case would result in a validation of his decrees limiting immigration, which have faced repeated setbacks in lower courts. But after his administration reworked its decrees, the Supreme Court canceled an October 10 hearing on the matter, though it may return to it later.

“There is only one prediction that is entirely safe about the upcoming term, and that is it will be momentous,” Justice Ruth Bader Ginsburg said recently.

At the age of 84, “RBG,” as she is known, is the doyenne of the court and a reliable liberal vote. Democrats fear that if she retires, the billionaire president will replace her with another conservative, tilting the ultimate US legal body rightward for years.

“For us, this is a ‘we’ll see you in the Supreme Court’ term,” said David Cole, legal director of the American Civil Liberties Union (ACLU), a leading rights group.

“In all 5 of our cases this term, Donald Trump is on the opposite side. And in three of them, his administration has broken from decades of precedent,” Cole said.

Cole cited a case in the state of Colorado involving a conservative Christian baker who opposes homosexuality and refused to prepare a wedding cake for a gay couple – the most important case on gay rights to reach the top court since gay marriage was legalized in the United States in June 2015.

The ACLU is representing the bride and groom, while the Trump administration supports the baker, who argues that his refusal is based in part on his right to creative freedom.

Another case in which the Trump administration takes the opposite stance from that of Obama concerns a voting case in Ohio, a Midwestern state where the governing Republican Party wants to purge the voter rolls of people who do not regularly vote.

This would mainly affect poor and minority citizens, groups that historically vote for Democrats.

In another voting case, justices will hear arguments for the first time in 12 years on the way states draw complicated and creative electoral districts to favor the party in power, a process known as “gerrymandering.”

A separate case aims to set the parameters on authorities’ access to geolocation data for mobile operators.

The case concerns a man sentenced to prison for theft in the Detroit area. Police were able to link him to a series of robberies by following his movements for 127 days through the geolocator data from his smartphone.

In a case concerning organized labor, the court will look at the compulsory union dues that civil servants are sometimes forced to pay.

The matter reached the court last year, but the justices split four-to-four.

With Gorsuch now on the bench, conservatives could win a historic victory in their decades-long war against unions.

Rulings in these cases are expected by the end of June 2018. – Rappler.com