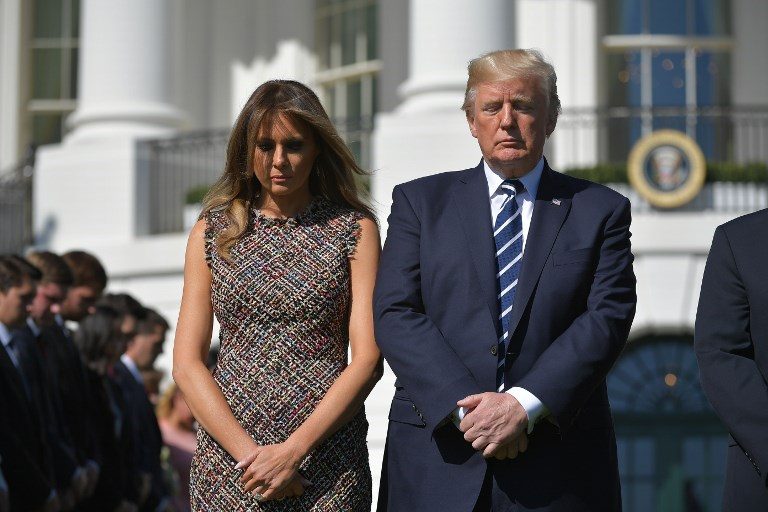 WASHINGTON DC, USA – US President Donald Trump condemned the massacre of 58 Las Vegas concert goers as an “act of pure evil” Monday, October 2, but refrained from addressing calls for gun control or the motives for the worst mass shooting in recent US history.

Delivering televised remarks from the White House, Trump tried to offer consolation and called for unity – an act that has become a grim rite of passage for modern US presidents.

Barack Obama wept as he tried to soothe the nation after the 2012 Sandy Hook primary school shooting, George W. Bush told Americans that the “nation grieves” after a similar outrage at Virginia Tech university.

There have already been over 270 mass shootings in the United States this year alone, according to www.massshootingtracker.org, although the exact definition is contested.

Trump, in a series of public displays of grief, ordered that flags be flown at half-staff until sunset Friday, October 6, offered prayers for the victims and announced he would visit Las Vegas on Wednesday, October 4.

Later, with bowed head, he led White House staff on the South Lawn for a moment of silence in respect for the dead.

“In moments of tragedy and horror, America comes together as one – and it always has,” Trump said.

Police have identified the gunman behind the Sunday night (October 1) massacre – which left more than 500 injured – as a 64-year-old former accountant named Stephen Craig Paddock, who killed himself before a SWAT team breached his hotel room where they found at least 8 rifles.

Officials have reacted cautiously to an Islamic State (ISIS) group claim that Paddock was a “soldier of the caliphate” but while his motive remained unclear, the shooting instantly rekindled the divisive national debate on gun control.

“There’s a time and place for a political debate, but now is the time to unite as a country,” said Sanders.

Trump insisted, “our unity cannot be shattered by evil. Our bonds cannot be broken by violence.”

But in the immediate aftermath of the shooting, that unity and those bonds were difficult to find.

Trump’s vanquished election rival Hillary Clinton hit out at the gun manufacturers lobby – the National Rifle Association – which has backed a congressional push to make it easier to obtain a gun silencer.

“The crowd fled at the sound of gunshots. Imagine the deaths if the shooter had a silencer,” tweeted Clinton, whose Democratic Party has tried in vain to introduce lasting gun control measures despite the national scourge of mass shootings.

“Our grief isn’t enough. We can and must put politics aside, stand up to the NRA, and work together to try to stop this from happening again.”

According to the latest Gallup poll, 55% of American voters would like to see stricter rules for buying guns.

But the issue of gun control is highly sensitive in the United States and Trump’s own views on the issue have changed markedly over his years in public life.

After the Sandy Hook Elementary School shooting, where 20 6- and 7-year old children and 6 adults were mowed down by a disturbed 20-year-old, Trump appeared to favor stricter rules.

Back then, his predecessor Obama – who often called Sandy Hook the worst moment of his 8-year presidency and recalls even his Secret Service detail being in tears – called for the deadlock to be broken and for Congress to act.

At that time Trump tweeted: “President Obama spoke for me and every American in his remarks in #Newtown Connecticut.”

But since then Trump – whose White House bid was eagerly endorsed by the NRA – has positioned himself as a staunch defender of the constitutional “right to keep and bear arms.”

The NRA donated an estimated $30 million to Trump’s campaign in 2016, according to the Center for Responsive Politics.

US Senator Chris Murphy, who was the congressman for Sandy Hook, renewed a call for action in the wake of the Las Vegas attack.

“Nowhere but America do horrific large-scale mass shootings happen with this degree of regularity,” he said.

“This must stop. It is positively infuriating that my colleagues in Congress are so afraid of the gun industry that they pretend there aren’t public policy responses to this epidemic.” – Rappler.com