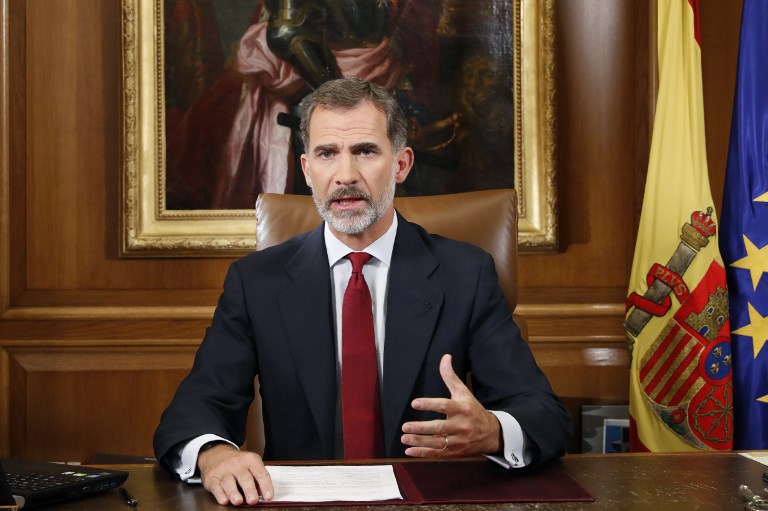 He spoke after hundreds of thousands of Catalans rallied in fury at violence by police against voters during a banned referendum on independence for their region on Sunday, October 1.

The central government and national courts branded the referendum illegal.

But Catalan leaders claimed the results showed the region had the right to secede and said they may unilaterally declare independence.

Felipe, 49, abandoned his previously measured tone over tensions with Catalonia, accusing its leaders of acting outside the law.

“With their irresponsible conduct they could put at risk the economic and social stability of Catalonia and all of Spain,” he said.

“It is the responsibility of the legitimate state powers to ensure constitutional order.”

‘Fuel to the fire’

Felipe repeated his earlier calls for harmony between Spaniards.

But after Sunday’s violence it was a delicate balancing act for a Spanish sovereign.

People watching in a bar in Barcelona whistled and booed after the king’s speech.

“It is a real disgrace… Far from solving anything it has added fuel to the fire,” said Domingo Gutierrez, a 61-year-old trucker.

“He did not say a word about the people who were injured… I have never been pro-independence, my parents are from Andalucia. But now I am more for independence than anyone, thanks to people like that.”

It is considered Spain’s worst political crisis since an attempted military coup in 1981.

That was defused by Felipe’s father, King Juan Carlos I, also in a stern television appearance.

Hundreds of thousands of protesters in Barcelona on Tuesday yelled for national security forces to get out of the region, branding them “occupation forces”.

Two hotels said they made police officers who were staying there leave, on the orders of local officials.

Spanish authorities “are losing control, it is clear”, Javier Perez Royo, a constitutional law professor at the University of Seville, told Agence France-Presse.

A rich industrial region of 7.5 million people, Catalonia accounts for a fifth of Spain’s economy.

It has its own language and cultural traditions.

Its claims for independence date back centuries but have surged during recent years of economic crisis.

Madrid blames the Catalan regional authorities for the tensions.

“The government of Catalonia is pushing the population to the abyss and inciting rebellion in the streets,” Spain’s Interior Minister Juan Ignacio Zoido said on Tuesday.

He said his government would take “all measures necessary to stop acts of harassment”.

Puigdemont’s regional government claimed that 2.26 million people took part in the poll, or just over 42% of the electorate – but the vote was held without regular electoral lists or observers.

Puigdemont has said he will present the results to the region’s parliament, where separatist lawmakers hold a majority – a step towards a possible declaration of independence.

The regional government said 90% of those who voted backed independence, but polls indicate Catalans are split.

Puidgemont has called for international mediation in the crisis. The European Union’s executive commission has voiced concern.

The European Parliament was scheduled to debate the Catalonia crisis on Wednesday. – Rappler.com