The Las Vegas shooting victims: Who they were

Oct 4, 2017 9:09 AM PHT
Agence France-Presse
Facebook Twitter Copy URL
Copied
Here is a look at some of those who died in the deadliest mass shooting in recent US history 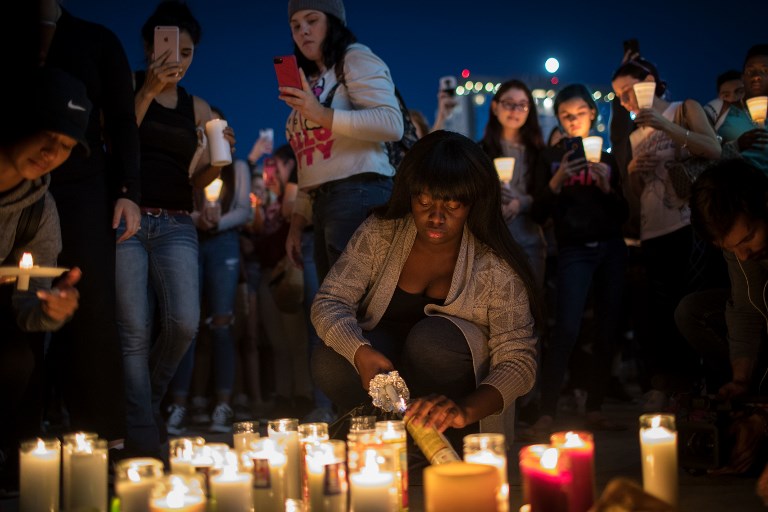 LAS VEGAS, USA – At least 59 people were killed when a 64-year-old retired accountant opened fire from a hotel room on people attending a country music concert on the Las Vegas Strip on Sunday night, October 1.

Here is a look at some of those who died in the deadliest mass shooting in recent US history:

McIldoon, of Maple Ridge, British Columbia, died in the arms of a stranger, bartender Heather Gooze, who then stayed by his side for hours after promising his mother and girlfriend by cellphone that she would not leave.

“I kept thinking about, ‘If this was me would people stay with me? Would they make sure I was OK? Would they contact my family?’ I couldn’t go…,” Gooze told ABC News. McIldoon, an apprentice mechanic, was one of at least three Canadians who died in the shooting.

Roybal, of Corona, California, was a US Navy veteran who served in Afghanistan and was in Las Vegas with his mother, Debby Allen, to celebrate his upcoming 29th birthday, according to the New York Daily News. Roybal’s final Facebook post was a response to people who would ask him: “What’s it like being shot at?”

A smiling Burditus, of Martinsburg, West Virginia, posted a Twitter selfie of herself with her beaming husband, Tony, at the concert just hours before she died.

“It saddens me to say that I lost my wife of 32 years, a mother of two, soon to be grandmother of 5 this evening in the Las Vegas Shooting. Denise passed in my arms. I LOVE YOU BABE,” Tony Burditus wrote on Facebook.

Hartfield was a Las Vegas police officer, a military veteran and the father of two children, according to the Las Vegas Review-Journal. He was off-duty at the concert and posted a picture from the venue on Facebook shortly before he died. He recently published a book about being a policeman called “Memoirs of a Public Servant.”

Gardner was a 26-year employee of San Bernardino County in California and the mother of 3 children, according to the San Bernardino Sun. She was attending the concert with her daughter, who rode with her in an ambulance to the hospital but was not wounded. Fourteen people were killed in San Bernardino in 2015 by a jihadist-inspired couple.

Gomez, from Riverside, California, was attending nursing classes at a community college after graduating from high school, where she was a member of the cheerleading squad, according to the Los Angeles Times. She was attending the concert in Las Vegas with her boyfriend.

Irvine, of San Diego, California, was an attorney with her own practice specializing in criminal and family law, according to The San Diego Union Tribune. The holder of a black belt in Taekwondo, Irvine was attending the concert with some girlfriends.

A single mother of 4 children, Klymchuk was one of at least 3 Canadians believed to have died. She was a bus driver and librarian at a Catholic school in Valleyview, Alberta. According to her Facebook page, Klymchuk was in Las Vegas with her fiance.

Parker was a 10-year employee of the Manhattan Beach police department in California where she worked as a records technician. According to the police department she was attending the concert with 4 other off-duty employees. The other officer suffered minor injuries.

Phippen, of Santa Clarita, California, was the owner of a home remodeling company, according to the Los Angeles Times, and was attending the concert with his son, Travis. The newspaper said Travis, an emergency medical technician, took his father to a hospital, where he died. “He was my best friend,” Travis was quoted as saying.

Ahlers, of Murrieta, California, was the mother of three children aged 3, 11 and 14, according to the Las Vegas Review-Journal, and was attending the concert with her husband of 16 years, Brian, and three other couples.

Barnette, of Riverside, California, worked at Disneyland for 11 years and was in Las Vegas celebrating a friend’s 30th birthday, according to the Los Angeles Times. “A senseless, horrific, act, and a terrible loss for so many. We mourn a wonderful member of the Disney family: Carrie Barnette. Tragic,” tweeted Disney CEO Robert Iger.

Murfitt, of Anchorage, Alaska, was a commercial salmon fisherman and was attending the concert with a friend, Brian MacKinnon, who held him as he died, the Alaska Dispatch News reported.

They were taking a picture together when Murfitt was struck by a bullet in the neck, MacKinnon said.

“We just couldn’t save him,” he said.

Smith was the office manager of an elementary school in Simi Valley, California, and the mother of 3 children, The Washington Post reported.

A school district spokeswoman told the newspaper she was a “big country music” fan and was attending the concert with friends.

Melton, a nurse living in Big Sandy, Tennessee, was attending the concert with his wife, Heather, an orthopedic surgeon.

“When the bullets began raining down from above, Sonny shielded her from danger, selflessly giving up his life to save hers,” Sanders said.

They couple were married in June 2016. – Rappler.com