Oct 4, 2017 5:33 PM PHT
Agence France-Presse
Facebook Twitter Copy URL
Copied
The National Court in Madrid summons Josep Luis Trapero and 3 other suspects to a hearing on Friday, says a spokesman, who asked not to be named 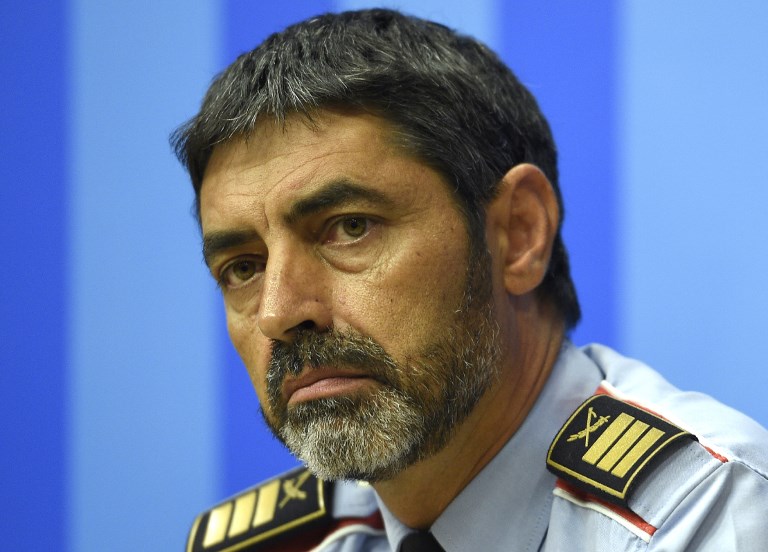 MADRID, Spain – A Spanish judge placed Catalonia’s regional police chief under investigation for alleged sedition, a court spokesman said Wednesday, October 4, after the force was accused of failing to rein in pro-independence protesters.

The National Court in Madrid summoned Josep Luis Trapero and 3 other suspects to a hearing on Friday, said the spokesman, who asked not to be named.

The accusations refer to unrest in Barcelona on September 20 and 21 after national security forces raided regional government offices in a crackdown against the independence drive.

That police action was met with furious protests and the Catalan regional police were accused of failing to intervene.

Tensions between Catalonia and the national government have plunged Spain into its worst political crisis in decades.

The spokesman said the 4 suspects were accused of “a crime of sedition… in relation to the gatherings and demonstrations carried out to forcibly prevent the authorities and their officers from carrying out their duties.”

The crime of sedition is punishable by up to 15 years in prison if committed by a member of the authorities, under Spain’s penal code.

Those two groups were involved in the September demonstrations. Protesters damaged Civil Guard police vehicles and stopped officers from leaving the building they were searching.

The region’s leaders defied Madrid by holding a banned referendum on independence on Sunday.