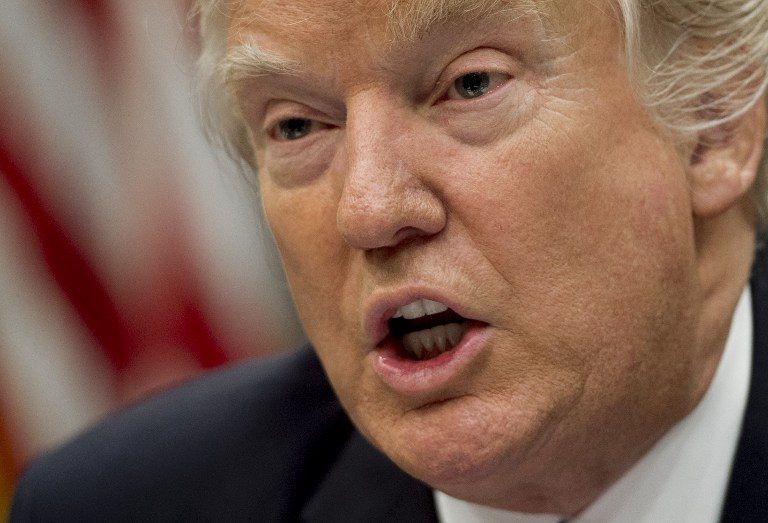 Facebook Twitter Copy URL
Copied
'They have not lived up to the spirit of the agreement,' says US President Donald Trump, in a huddle with military leaders ahead of perhaps the most consequential foreign policy decision of his young presidency

WASHINGTON DC, USA – US President Donald Trump on Thursday, October 5, insisted Iran has not acted in keeping with a deal to curb its nuclear program, days before he must decide on the future of the accord.

“They have not lived up to the spirit of the agreement,” said Trump, as he huddled with military leaders ahead of perhaps the most consequential foreign policy decision of his young presidency.

“The Iranian regime supports terrorism and exports violence and chaos across the Middle East,” Trump said in the Cabinet Room.

“That is why we must put an end to Iran’s continued aggression and nuclear ambitions” he said. “You will be hearing about Iran very shortly.”

Gathered with military leaders and their spouses for a function after the meeting, Trump, stone-faced, said “this may be the calm before the storm,” while refusing to go into detail.

Trump must tell Congress by October 15 whether he believes Iran is in compliance with the agreement.

He may well fly in the face of advice from some of his closest advisors, declaring Iran is not in compliance and leaving the pact’s fate in the hands of the Republican-controlled Congress.

Ahead of that deadline, several officials familiar with White House deliberations told Agence France-Presse Trump has made it clear he does not want to certify Iran’s compliance. But a formal decision has yet to be made.

“The president is going to make an announcement about the decision that he’s made on a comprehensive strategy that his team supports, and we’ll do that in the coming days,” said Sarah Huckabee Sanders.

White House officials cautioned against reports that Trump would make a speech revealing his decision next Thursday, October 12. But the decision must come by an October 15 deadline.

Trump has often railed against the Obama-era deal, which offered Iran massive sanctions relief in return for curbs on its nuclear program.

He has repeatedly promised to rip it up, but has passed up an opportunity to end sanctions relief.

Every 90 days Trump must tell Congress whether Iran is living up to its end of the bargain, something that has already caused him political pain on two occasions.

The administration has made it clear that it wants Iran to stop ballistic missile tests and stop “nefarious” behavior across the Middle East, two issues that were not part of the agreement.

“They have not lived up to the spirit of the agreement and we’ll be discussing that tonight” said Trump. “You will be hearing about Iran very shortly.”

The build up to Trump’s decision has been dominated by intense debate inside the White House and fierce lobbying in Congress.

Top military advisors Defense Secretary James Mattis and General Joseph Dunford, the chairman of the joint chiefs of staff, have spoken out publicly in favor of the agreement.

European ambassadors and diplomats have been camped out on Capitol Hill, trying to argue against any punitive actions that invite Iran to decide the United States is in non-compliance.

Meanwhile, the deal’s opponents, such as Senator Tom Cotton, have argued that Iran is not in compliance and sanctions and even military action should be considered.

Cotton met Trump at the White House on Thursday to make his case.

The Arkansas senator has argued that Iran is operating more advanced nuclear centrifuges than it is permitted, exceeding limits on heavy water stocks, continuing to illicitly procure nuclear and missile technology outside of approved channels and refusing to grant international inspectors access to nuclear-research and military facilities. – Rappler.com