Oct 6, 2017 10:41 PM PHT
Agence France-Presse
Facebook Twitter Copy URL
Copied
In a speech about protecting the dignity of children in the internet era, Francis warns of the spread of extreme pornography, sexting, and online bullying as well as sexual exploitation, trafficking and the live-streaming of rape and violence against children 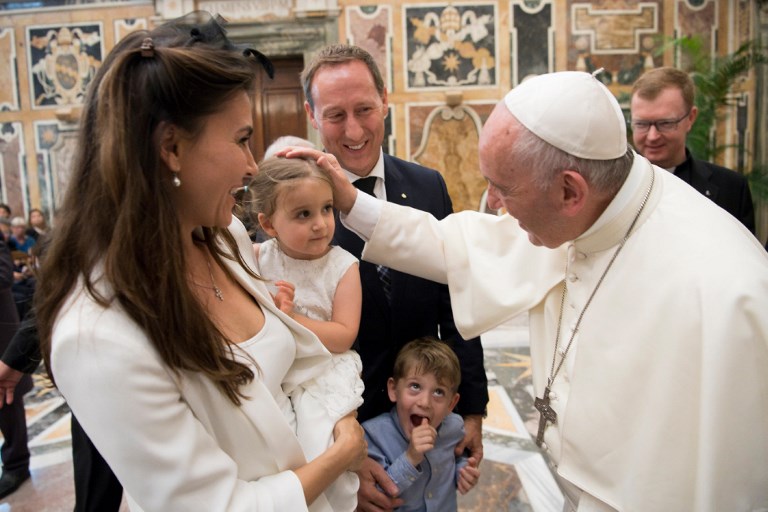 VATICAN CITY – Pope Francis on Friday, October 6, urged the world, including the Catholic Church, to face up to the devastating effects of online sexual violence on young people, including extreme pornography and sexting.

“We have to keep our eyes open and not hide from an unpleasant truth that we would rather not see,” Francis said at a gathering of technology executives and health professionals at the Vatican.

Alluding to the paedophile scandals that have rocked the church, he added: “For that matter, surely we have realised sufficiently in recent years that concealing the reality of sexual abuse is a grave error and the source of many other evils?”

In a speech about protecting the dignity of children in the internet era, Francis warned of the spread of extreme pornography, sexting, and online bullying as well as sexual exploitation, trafficking and the live-streaming of rape and violence against children.

He also cited evidence of the “profound impact of violent and sexual images on the impressionable minds of children”.

“These problems will surely have a serious and life-long effect on today’s children.”

More than a quarter of the world’s three billion internet users are children, with many adults unable to understand technology that can block and filter disturbing content.

“We would be seriously deluding ourselves if we thought that a society, where an abnormal consumption of internet sex is rampant among adults, could be capable of effectively protecting minors,” he added.

While recognising how the internet has opened up a forum for the freedom of expression and exchange of ideas, he said it has also offered new means for the abuse and corruption of minors.

He said collaboration between governments and law enforcement was needed at a global level to address the problem.  – Rappler.com