Oct 7, 2017 11:16 PM PHT
Agence France-Presse
Facebook Twitter Copy URL
Copied
(UPDATED) Witnesses and footage posted on social media suggest the man was pinned down on the ground by passers-by near the Victoria and Albert Museum 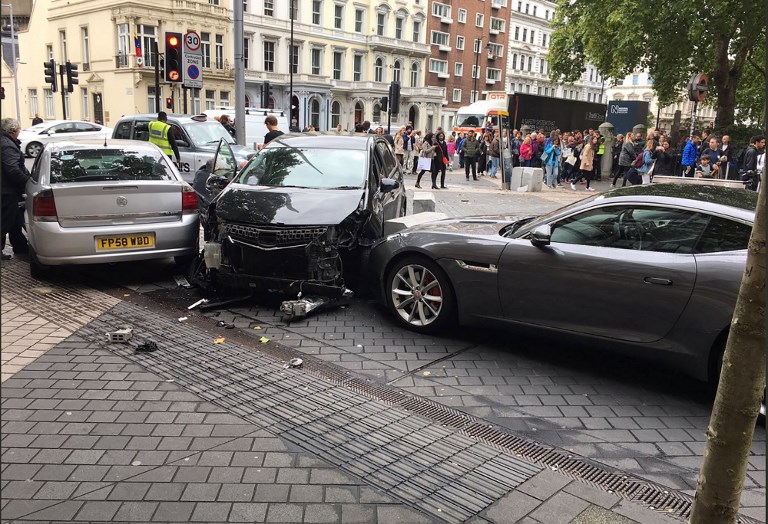 LONDON, United Kingdom (3rd UPDATE) – Eleven people were injured on Saturday, October 7, when a car mounted the pavement and ploughed into pedestrians near London’s Natural History Museum, leading to the driver’s arrest on suspicion of dangerous driving.

Police said it was a traffic incident and ruled out any terrorist link, after three attacks in the British capital this year in which vehicles were deliberately driven into people on the street.

Crowds in the area, which is popular with families and tourists, fled screaming in panic when the car veered onto the semi-pedestrianized Exhibition Road in South Kensington.

Witness accounts and footage posted on social media showed a man being pinned down on the ground by passers-by, next to a black car with a smashed bonnet.

“The incident is a road traffic investigation and not a terrorist-related incident,” London’s Metropolitan Police said in a statement.

“Whilst enquiries continue it is believed a car mounted the pavement and collided with a number of pedestrians.”

It said the arrested man was among nine people taken to hospital, while two others were treated at the scene.

No one is believed to have life-threatening or life-changing injuries, and the majority were discharged by late Saturday.

The suspect, in his forties, was taken to London police station where he was questioned on suspicion of dangerous driving, police said.

Armed police were deployed to the scene and much of the surrounding area, which includes the Science Museum and the Victoria & Albert Museum, was cordoned off.

Security is high in Britain after 5 terror attacks since March – 4 of them in London and one in Manchester – with the bloodshed claiming 35 lives.

Prime Minister Theresa May offered her thanks to the emergency services, adding: “My thoughts are with the injured.”

‘Everyone flew in panic’

London’s Metropolitan Police said they were called to the scene at 2:21 pm (1321 GMT) after reports of a collision.

One witness, identified only as Katy, told LBC London radio she had seen two people injured, including a young boy whose leg was hurt.

“We treated 11 patients, mostly for leg and head injuries, and took nine of them to hospital,” said Peter McKenna, deputy director of operations for the London Ambulance Service.

Another eyewitness who gave his name only as Leonard, told AFP: “I was near South Ken station and there were many police.

“Suddenly a police woman officer shouted at the crowd to run, and everybody flew in panic, many people screaming.”

Not far away, tens of thousands of football fans took part in a silent protest “against extremism”, walking from Park Lane past Downing Street and to parliament.

The Football Lads Alliance was formed after the London Bridge attack in June and brought together supporters of rival teams with military veterans.

Ahead of the march, founder John Meighan said the group wished to “show our concern at the recent upsurge in terror attacks taking place across the UK and Europe”. – Rappler.com