Oct 8, 2017 7:24 AM PHT
Agence France-Presse
Facebook Twitter Copy URL
Copied
The piece of paper was found by police officers who stormed shooter Stephen Paddock's room after he launched his attack from the 32nd floor of the Mandalay Bay hotel 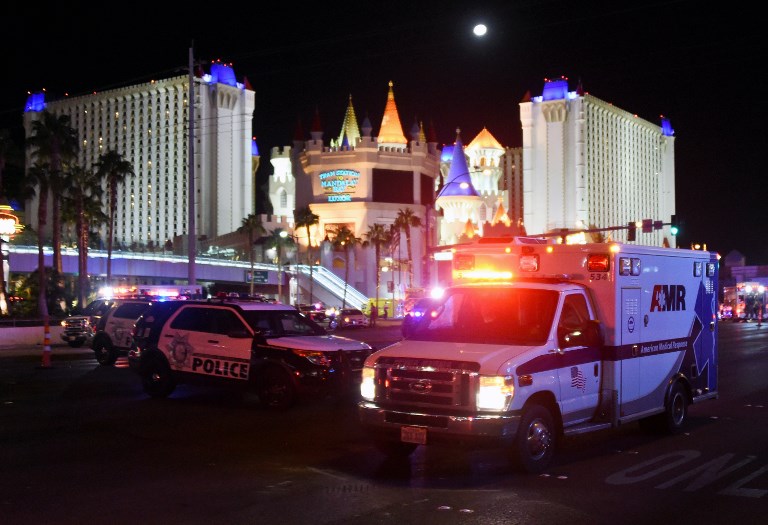 WASHINGTON DC, USA – A note discovered in the hotel room of Las Vegas shooter Stephen Paddock featured hand-written calculations on where he needed to aim to increase his accuracy and number of kills, US network CBS reported Saturday, October 7.

The piece of paper was found by police officers who stormed Paddock’s room after he launched his attack from the 32nd floor of the Mandalay Bay hotel Sunday night – killing 58 people and injuring nearly 500.

In an interview set to air on Sunday, Officer David Newton of the Las Vegas Police Department’s K-9 unit, told CBS’ “60 Minutes” he noticed Paddock’s note “on the nightstand near his shooting platform.”

“I could see on it he had written the distance, the elevation he was on, the drop of what his bullet was going to be for the crowd. So he had had that written down and figured out so he would know where to shoot to hit his targets from there,” he said.

Newton added that forcing entry into the room with an explosive before finding Paddock’s body and an arsenal of weapons was like something “out of a movie.”

Paddock’s hotel suite gave him an ideal perch from which to carry out his attack on a crowd of more than 20,000 people attending a country music concert across the street, some 400 yards (365 meters) away.

The note has not shed any light on the gunman’s motives, which authorities are yet to uncover nearly a week after the deadliest mass shooting in recent US history.

“We still do not have a clear motive or reason why,” Undersheriff Kevin McMahill of the Las Vegas Metropolitan Police Department told reporters Friday, adding that law enforcement was continuing to search for answers with “great tenacity.”

The shooting has refueled debate on gun control in the US, with even the powerful pro-gun National Rifle Association calling on authorities to review laws surrounding “bump stocks.”

Used by Paddock, a bump stock’s spring-loaded mechanism uses a rifle’s recoil to repeatedly and rapidly pull the trigger, allowing the user to fire several hundred rounds per minute. – Rappler.com