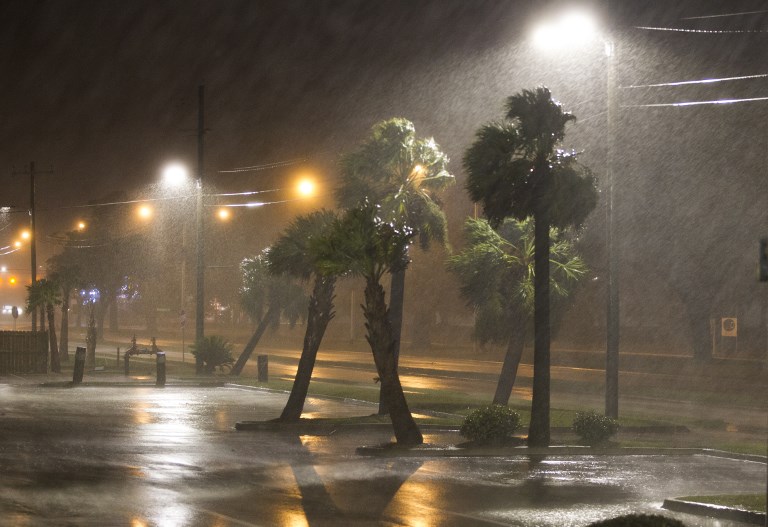 NEW ORLEANS, USA (4th UPDATE) – Nate eased quickly overnight from one of the fastest-moving hurricanes ever to hit the US Gulf Coast to a fitful and deteriorating tropical depression, but only after flooding streets and casinos, pitching boats onto beaches, and leaving thousands without power.

The storm, once predicted to hit the mainland as a powerful Category Two storm, had left a trail of death and destruction in Central America.

But it weakened rapidly overnight after making landfall twice as a Category One storm – first in southeastern Louisiana and then along the Mississippi coast – its impact far less severe than predicted.

“Hurricane Nate had the potential to wreak havoc on Louisiana,” the state’s governor John Bel Edwards said in a statement Sunday, October 8, “but thankfully, we were largely spared major damage.”

There were no immediate reports of deaths or injuries.

New Orleans, ravaged by Hurricane Katrina in 2005, was largely spared, and Mayor Mitch Landrieu lifted a mandatory curfew after only an hour.

Residents accustomed to far worse said they were grateful the storm had passed with little fuss.

“It was pretty mellow,” said an upbeat Diana Whiteman, whose home on a hill overlooking the Mississippi coast was hit by a falling tree. “I was here for Katrina.”

Around the region, crews were already at work Sunday restoring power to the estimated 100,000 customers who lost it.

At 11 am (1500 GMT), the storm had top winds of only 35 miles (55 kilometers) per hour and was moving north-northeast, approaching Birmingham, Alabama at a speed of 24 miles per hour, the National Hurricane Center said.

That city has a string of casinos along the coast, and several were flooded, but Deback said they are designed to take water on their first floor during a major storm.

Authorities warned of a continuing threat of tornadoes as the storm tracks northward.

Parts of southern Alabama had up to 6 inches (15 centimeters) of rain, but New Orleans saw barely an inch and that city’s Times-Picayune newspaper summed up Nate’s passage as a “whimper, no bang.”

The deteriorating storm is expected to bring mostly heavy rains as it moves toward Tennessee and Kentucky.

Nate will, nonetheless, go down in history as part of one of the most destructive hurricane seasons in years, coming on the more devastating heels of storms named Harvey, Irma, and Maria.

At one point, the National Weather Service reported, Nate’s forward motion of 28 miles per hour was the fastest ever recorded for a hurricane in the Gulf of Mexico. Its speedy passage helped alleviate flooding.

‘The worst behind us’

“We have had some homes flooded, numerous vehicles, things of that nature… We don’t believe we have had any types of injuries from this,” he told CNN.

“Fortunately, I can say that in the last hour, I think the worst is now behind us.”

US President Donald Trump has released federal aid to help mitigate the storm’s impact in Alabama, Louisiana, and Mississippi.

Officials said the recent hurricanes, devastating as they were, actually helped with preparations for Nate, since emergency supplies and assets deployed for the earlier storms were still in place.

Still, experts say it could take months, or more, for the United States to recover from Hurricane Harvey, which tore through Texas and then Louisiana in August, and Irma, which slammed Florida in September, as well as from Maria, which inflicted catastrophic damage to the US territory of Puerto Rico and other Caribbean islands in late September.

When Nate struck Central America on Thursday and Friday (October 5 and 6), at least 31 people were killed.

Brock Long, administrator of the US Federal Emergency Management Agency, acknowledged Sunday that the string of storms had “strained” FEMA’s resources. But he insisted on ABC that the agency was well positioned to deal with damage from Nate.

As residents surveyed the damage Sunday, some shrugged off Nate’s passage with the aplomb of the storm-hardened.

Biloxi is a favorite weekend getaway for Connie Davidson, 42. She was back on Sunday using her smartphone to photograph Nate’s messy aftermath in a marina behind the Golden Nugget Casino, where a sailboat had sunk, leaving nothing visible but its mast.

“They’ll have this cleaned up in no time,” she said.