Trump says North Korea diplomacy has failed, ‘only one thing will work’ 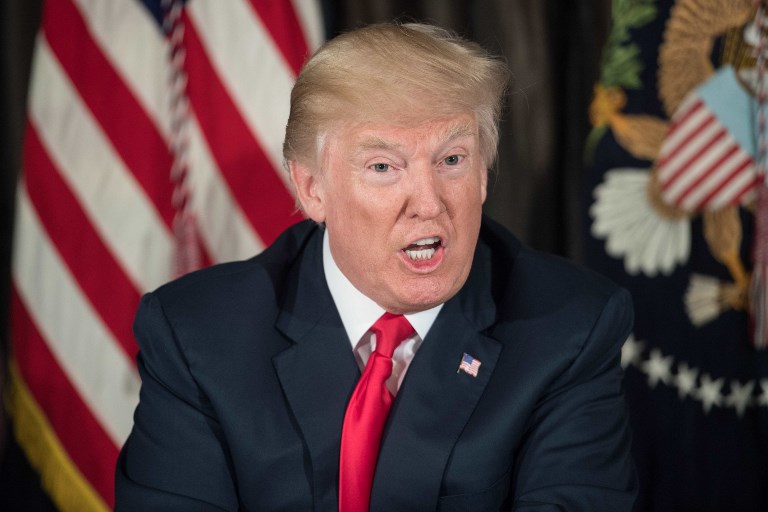 WASHINGTON, USA – US President Donald Trump said Saturday, October 7, that diplomatic efforts with North Korea have consistently failed, adding that “only one thing will work.”

Trump has engaged in an escalating war of words with North Korean strongman Kim Jong-Un, trading insults amid rising tensions between the two nuclear-armed rivals.

“Presidents and their administrations have been talking to North Korea for 25 years, agreements made and massive amounts of money paid,” Trump tweeted.

It “hasn’t worked, agreements violated before the ink was dry, makings fools of U.S. negotiators. Sorry, but only one thing will work!”

Trump returned to the theme when he appeared on former governor Mike Huckabee’s show on Trinity Broadcasting Network television on Saturday, blaming previous administrations for not having adequately addressed the issue before.

The US has not ruled out the use of force to compel Pyongyang to halt missile and nuclear tests, and Trump has threatened to destroy the country.

The mercurial American president also told journalists at a recent gathering with military leaders to discuss Iran, North Korea, and the Islamic State group that the current period “could be the calm before the storm,” declining to clarify his remarks.

In recent days, as Secretary of State Rex Tillerson flew home from meeting with top Chinese officials, Trump tweeted that his envoy was “wasting his time” in trying to probe North Korea’s willingness to talk.

The message came after Tillerson had revealed there were backchannels between US and North Korean officials.

Secretary of Defense James Mattis later expressed support for the diplomatic track in testimony before the Senate Armed Services Committee.

“The Defense Department supports fully Secretary Tillerson’s efforts to find a diplomatic solution, but remains focused on defense of the United States and our allies,” Mattis said.

In his debut speech at the United Nations General Assembly, Trump threatened to “totally destroy” North Korea if it threatens the US or any of its allies, deriding Kim as “Rocket Man” and warning he is on a “suicide mission.”

Trump’s administration has also been at the forefront of a drive to impose a series of sanctions against North Korea in response to its 6th nuclear test – the largest yet – and the firing of two missiles over Japan.

North Korea’s main economic partner China has signed up to the sanctions, including restrictions on imports, as has Russia.

The United States fought a bloody conflict in Korea from 1950 to 1953 that ultimately ended in stalemate and the continued division of the peninsula after hundreds of thousands of Chinese troops entered on the side of the north, turning it into a war of attrition.

A renewed military conflict on the Korean peninsula would come with devastating consequences: in addition to its nuclear weapons, North Korea has a conventional arsenal that could wreak havoc on the South Korean capital Seoul, which is located near the “demilitarized zone” dividing the two countries. – Rappler.com