Anger in Ghana after 7 die in fuel station fire, blasts 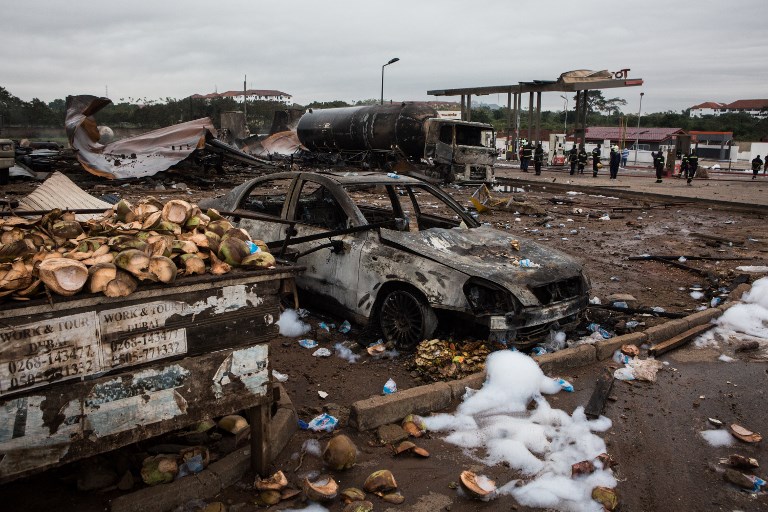 ACCRA, Ghana (3rd UPDATE) – Ghana’s government on Sunday, October 8, promised to tighten safety at fuel stations across the country after 7 people were killed and scores more injured when a tanker truck carrying natural gas caught fire in the capital and triggered explosions.

The fire and blasts in the Legon area of the city on Saturday, October 7, gutted a liquefied gas filling station and a nearby petrol station, sending local residents running from their homes, as huge fireballs lit up the night sky.

The head of the Ghana Standards Authority, Alex Dodoo, said there had been 8 gas explosions in 4 years, including in June 2015, when a similar fire and explosion at a petrol station in Accra killed more than 150 people.

In December last year, a gas tanker caught fire in another residential area of Accra, creating a fireball that caused 5 deaths and damaged a nearby school.

More than 100 others were injured in May this year in a similar blast in the western city of Takoradi.

“This is a time for concrete action,” Dodoo was quoted as saying by Citi FM radio after Saturday’s incident. “Fixing it and making sure that it doesn’t happen again is a responsible thing to do.”

Information minister Mustapha Abdul Hamid said in a statement: “At least 7 people have been confirmed dead and 132 injured, out of which 64 have been discharged and 68 are still receiving treatment.

“An investigation has been launched into the cause of the explosion and shall be followed up with firm action to forestall future similar recurrences.”

President Nana Akufo-Addo said cabinet ministers will meet Thursday, October 12, and will likely come out with a “comprehensive program” and policy to prevent future explosions.

“I would like everybody involved in the industry to recognize we will all have to make adjustments to be able to guarantee the safety and the security of our people so these things do not happen again,” he said.

But the OccupyGhana pressure group feared nothing would change once the messages of condolences and anger passed.

“One would have thought that after the June 3 (2015) disaster there would have been a massive clampdown on how filling stations are sited in residential areas,” the group’s spokesman, Nana Sarpong Agyeman-Badu, told Agence France-Presse.

“I am pretty sure in the next couple of weeks we will see back and forth – people going around shutting down filling stations – and then we go back to as we were.”

The National Petroleum Authority announced in May this year that LPG outlets would no longer be allowed to refill cylinders on site to prevent explosions.

Instead, they would only be allowed to sell cylinders refilled at bottling plants.

The NPA said the energy ministry would roll out the policy “soon” but it was not immediately clear if the new measures were in place.

Sarpong Agyeman-Badu said civil servants who handle fuel station applications “should also be made to answer questions [about] how these people are able to get the permits.”

The busy Atomic Junction area of Legon is home to 3 fuel stations, transport services, and restaurants. It is also near a high school and the University of Ghana campus.

Dominic Osei, a local businessman, said there were too many natural gas filling stations near petrol stations.

“All of them too are flammable,” he said. “So, as soon as there is a small or a lighter mistake, then… there will be a disaster in the country.”

A petition addressed to President Akufo-Addo was created. It demanded better regulation and inspection of existing and proposed facilities, including siting them at least 50 meters (165 feet) from homes and 100 meters (330 feet) from schools and hospitals.

Abena Awuku, a Ghanaian living in the Netherlands, proposed the measures on the change.org site, saying fuel stations were “all disasters waiting to happen and the time to act is now.”

“There was a similar incident two years ago and we were fed lies and empty promises about regulations going to be put in place but then we had to witness this,” she told Agence France-Presse later.

“These deaths could have easily been prevented, so let’s prevent them from ever occurring again in the future.” – Rappler.com