Talks or takeover? Next steps in Catalonia crisis

Oct 10, 2017 12:00 AM PHT
Agence France-Presse
Facebook Twitter Copy URL
Copied
So what happens if Catalonia's government declares independence anyway, possibly as early as Tuesday – or what if it doesn't? Here are six possible scenarios and tactics to watch out for 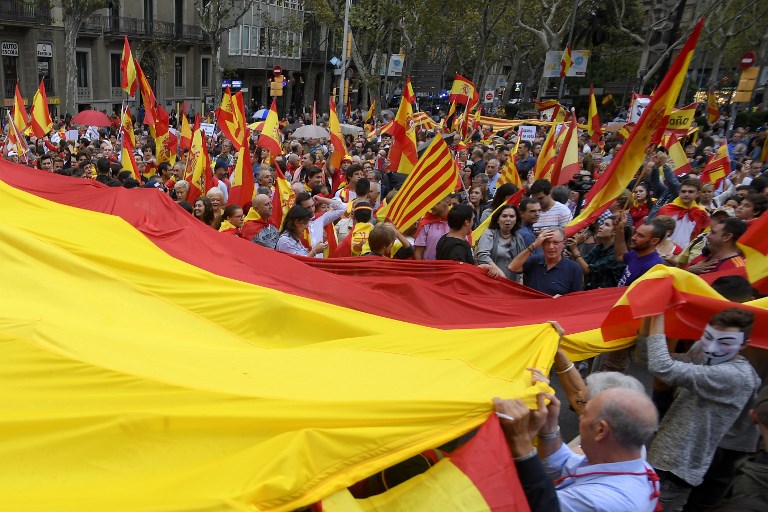 MADRID, Spain – If Catalan leader Carles Puigdemont declares the region independent as promised, possibly by Tuesday, Spain will face its greatest political upheaval since its return to democracy in the 1970s.

Any independence declaration will be rejected by the Spanish government and courts, and by many people even in Catalonia, which polls shows to be almost evenly divided on secession.

So what happens if Catalonia’s government declares independence anyway, possibly as early as Tuesday – or what if it doesn’t?

Here are six possible scenarios and tactics to watch out for:

Article 155 of Spain’s constitution says that if a region’s government breaches its constitutional obligations or “acts in a way that seriously threatens the general interest of Spain,” Madrid can “take necessary measures to oblige it forcibly to comply or to protect said general interest.”

The government side holds a majority in the Senate, the institution charged with enforcing the article.

Separatist leaders have warned that such a move would fuel support for independence.

Instead of immediately declaring independence after an outlawed referendum on October 1, Puigdemont has played for time by saying he is open to negotiations or mediation.

Separatists’ roadmap for independence consists of a declaration of independence followed by a series of legislative steps and votes to set up a new state, which could take months.

Rajoy says he would only hold talks with Puigdemont’s side if the Catalan separatists abandoned their independence bid in line with the Spanish constitution.

“The ideal thing would be not to seek drastic solutions,” he said in an interview published this weekend in El Pais newspaper.

“But in that case rectifications will have to be made.”

Spain’s government insists the independence drive is illegal and the courts ruled that the referendum breached the constitution.

That raises the prospect of Spanish police arresting Puigdemont and other separatist leaders if they declare independence.

Last month, several Catalan officials were arrested and charged over their part in organising the referendum.

The regional police chief and civil leaders are under investigation for alleged sedition and risk jail sentences.

Puigdemont, a former journalist and not a career politician, said he is not afraid of going to jail over independence.

Moves by Madrid to impose its authority on Catalonia risk sparking further protests or even unrest in the region.

In a sign of the potential for violence, police beat unarmed voters while trying to close down polling stations during the referendum vote.

That shocked even many Catalans who were opposed to independence and sparked angry demonstrations against the police.

Hundreds of thousands of people also demonstrated during a general strike on October 3.

“Any attempt by the state to entirely disempower the regional government and regional parliament will probably be met by mass mobilizations and more unrest,” wrote Federico Santi, an analyst at consultancy Eurasia Group.

Puigdemont has called for EU mediation, which Rajoy has rejected.

Careful not to undermine Rajoy, the European Union has merely called for dialogue between the sides.

Catalan leaders say they want to remain part of the European Union, but Brussels says that an independent Catalonia would automatically be out and have to reapply to join.

“Other EU governments have little interest in getting involved,” analysts at investment group VS Lombard wrote in a note.

“They do not want to get embroiled in a messy confrontation or encourage separatist movements.”

If the Catalans bow to pressure at the last minute and do not declare independence, Puigdemont’s political survival would be in doubt. The crisis would drag on but Rajoy’s hand would be strengthened.

Without a declaration of independence, Puigdemont risks seeing “the momentum behind Catalan independence fizzle out anticlimactically as he ignores his own referendum,” the TS Lombard analysts wrote.

“Ultimately, he will probably be forced to continue with the existing pattern of confrontation and escalation.” – Rappler.com