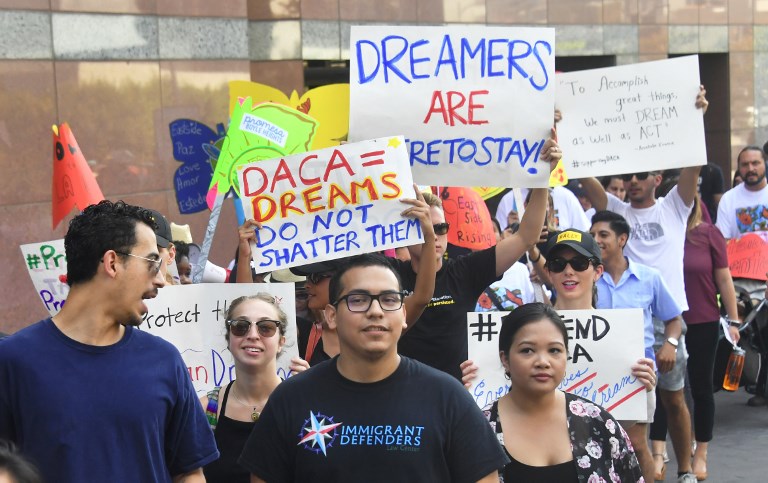 WASHINGTON DC, USA – US President Donald Trump has cast serious doubt on the future of 690,000 US residents brought illegally to the country as children by presenting Congress with a list of hardline immigration demands as a quid-pro-quo for protecting the so-called “Dreamers.”

A month after appearing to reach an understanding with his Congressional opponents, late on Sunday, October 8, the White House served Democrats with an ultimatum demanding cooperation on one of Trump’s pet projects if they want to shield the youngsters from deportation.

The administration said Congress must fund a controversial border wall, help speed deportations and dramatically increase the corps of immigration officials – throwing sand in the gears of the proposed deal.

Last month, Trump and top Democrats appeared to have agreed to grant hundreds of thousands of so-called “Dreamers” – many whom know no other country but the United States – a form of amnesty and tackle the president’s other immigration priorities separately.

“We told the president at our meeting that we were open to reasonable border security measures alongside the DREAM Act, but this list goes so far beyond what is reasonable,” the pair said in a joint statement.

“The president’s demands are nothing more than a laundry list of cruelty toward immigrants,” said Hector Figueroa, head of a large labor union representing property services workers.

“Protecting Dreamers should not mean scapegoating and criminalizing their parents and millions of other immigrants.”

But the demands place Democrats in a bind: ignoring Trump could result in 690,000 people being deported, and while acquiescing could save them it could also yet split the party.

Trump had been under political pressure from his right flank, who wholeheartedly embraced his anti-migrant views and were up in arms about the prospect of a lasting amnesty for the Dreamers, who had been shielded from deportation under Trump’s predecessor Barack Obama.

White House critics pointed to Stephen Miller, a Trump aide who has embraced the far right, as a catalyst of the president’s about-face.

“Miller’s wish list of anti-immigrant policies is designed to scuttle progress for Dreamers and is afoul with unconstitutional ‘reforms.'”

Although the demands are were in keeping with Trump’s go-big-or-go-home negotiating style, Schumer and Pelosi also hinted at Trump’s staff undercutting him.

“The list includes the wall, which was explicitly ruled out of the negotiations. If the president was serious about protecting the Dreamers, his staff has not made a good faith effort to do so.”

The White House list is topped by “border security,” a category that includes building a massive wall on the southern US border that Trump promised would be paid for by Mexico, which has said it will not do so.

Trump also wants to dramatically ramp up the number of officials involved in enforcement, hiring an additional 10,000 Immigrations and Customs Enforcement officers and 1,000 attorneys, 370 immigration judges and 300 federal prosecutors.

Critics fear the rush to hire more personnel could mean a lapse in background checks and the politicization of the force.

Trump also hopes to prevent immigrants from sponsoring extended family members to move to the US, limiting such green cards to spouses and children, as well as to close “loopholes” that prevent the deportation of children who enter the country illegally.

The list includes financially targeting “sanctuary cities” that have resisted the Trump administration’s efforts to clamp down on illegal immigrants.

Other proposals include cracking down on people who overstay visas, restricting asylum and expanding criteria that would make someone inadmissible to the US.

Trump has made toughening immigration regulations a central part of his first year in office, also issuing several versions of a controversial travel ban that has been criticized for targeting Muslim-majority countries and subject to numerous legal challenges.

Also suspended are certain Venezuelan government officials and their families, due to what the US called poor security and a lack of cooperation with American authorities. – Rappler.com