Oct 10, 2017 4:40 PM PHT
Agence France-Presse
Facebook Twitter Copy URL
Copied
'In November 2018 there will be an election. Is it clear?' the often gruff leader tells reporters, adding he would announce the exact date next June 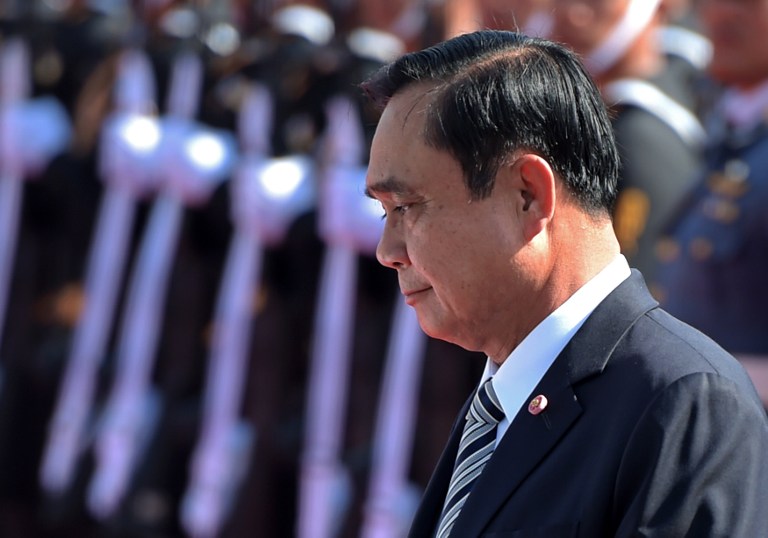 BANGKOK, Thailand – Thailand will hold elections in November 2018, junta chief Prayut Chan-O-Cha said on Tuesday, October 10, a date that will fall more than 4 years after he seized power in a coup.

Immediately after his 2014 putsch Prayut promised to return power to civilians within 18 months. But that date has repeatedly slipped, and even after the vote critics say there will be limits on democracy.

“In November 2018 there will be an election. Is it clear?” the often gruff leader told reporters, adding that he would announce the exact date next June.

The election will not restore the full-scale democracy that existed before the latest military takeover in Thailand – a country that has seen more than a dozen coups since the end of absolute monarchy in 1932.

After seizing power the generals drafted a new charter that curbs the power of elected politicians and calls for a fully appointed upper house Senate with several spots reserved for military leaders.

The junta has also said that any future government must adhere to a “legally binding 20-year-plan” for the country that is still in the works.

The election announcement comes after Prayut travelled to the US earlier this month to meet with President Donald Trump at the White House – an embrace the junta chief was denied under Barack Obama’s administration.

A joint statement after the meeting said Trump welcomed Thailand’s commitment to “lead to free and fair elections in 2018.”

That unexpected announcement caused a commotion back in the kingdom, where Prayut initially rowed back and said only that a specific date would be announced in 2018. – Rappler.com