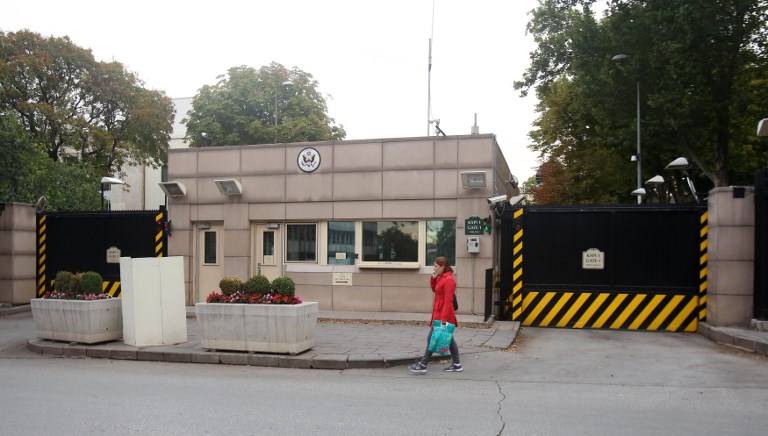 ISTANBUL, Turkey – Turkish President Recep Tayyip Erdogan vowed Tuesday, October 10, that Turkish officials will boycott the US ambassador, deepening one of the worst rifts in decades between the NATO allies.

Erdogan said Turkey no longer regarded outgoing envoy John Bass as the US representative to Turkey after American missions in the country stopped issuing visas.

The dispute erupted last week when Turkey arrested a Turkish employee of the American consulate on suspicion of links to the group blamed for last year’s failed coup.

In response, the United States stopped issuing visitor visas from its missions in Turkey, prompting Turkish missions to hit back with a tit-for-tat step of their own.

“We have not agreed and are not agreeing to this ambassador making farewell visits with ministers, the parliament speaker and myself,” Erdogan said.

“We do not see him as the representative of the United States in Turkey,” he added, speaking at a news conference with Serbian President Aleksandar Vucic in Belgrade.

Bass is shortly to leave Turkey after being named the US envoy to Afghanistan and it is traditional for outgoing envoys to make valedictory visits to top officials.

And, although Bass is in Turkey for only a few more days, it is unprecedented in the history of Turkish-US relations for Ankara to no longer recognize Washington’s ambassador.

Erdogan said the arrest of the consulate staffer, based on evidence found by the police, shows “something is going on at the Istanbul consulate.”

“The US should evaluate one thing: how did those agents leak into the consulate?” Erdogan said.

Some Turkish officials have long alleged a US hand in the coup attempt on July 15 last year, which Ankara blames on the US-based Muslim preacher Fethullah Gulen.

Washington has dismissed claims it was involved as a ludicrous conspiracy theory, and on Tuesday it said it has seen no evidence linking its Turkish employees to a plot.

“These actions were are deeply disturbing to us,” State Department spokesman Heather Nauert said in Washington, urging Turkey to allow the detained men access to lawyers.

“We have not seen any evidence that indicates that our staff members were involved in what the government is accusing them of doing,” she said.

In March, a Turkish employee at the US consulate in the southern city of Adana was arrested on charges of supporting the Kurdistan Workers’ Party (PKK).

‘Pivot away from the West’

Turkish officials had expressed hope of a new page in Ankara-Washington relations under President Donald Trump after bickering in the last months of Barack Obama’s term.

So far, Erdogan has been careful not to take aim at Trump during the dispute, putting the blame squarely on Bass.

He said that if the order to suspend visa issuance came from Bass, then the US administration “should not keep him here one more minute”.

“They need to ask him, How can you break relations between the United States and Turkey, who gave you this authority?” he demanded.

But Nauert responded that Bass had been operating with the full authority of the US government.

“He’s one of the best ambassadors that we have out there. Proud to have him serving in Turkey and looking forward to having him in his next post,” she said.

Turkish pro-government media have rounded on the United States, with the Yeni Safak daily describing the US as “not an ally but an enemy”.

Ties have also frayed over the refusal of the United States to extradite Gulen, and its support for Kurdish militias in Syria.

Meanwhile, American pastor Andrew Brunson, who ran a church in the western city of Izmir, has been held since October 2016 on charges of being a member of Gulen’s group.

Erdogan suggested last month Turkey could release him in exchange for Gulen but the US, which treats extraditions as a judicial matter, has shown no interest in the idea.