Oct 11, 2017 9:00 AM PHT
Agence France-Presse
Facebook Twitter Copy URL
Copied
It comes days after Trump said that diplomatic efforts with North Korea have consistently failed, adding that 'only one thing will work' 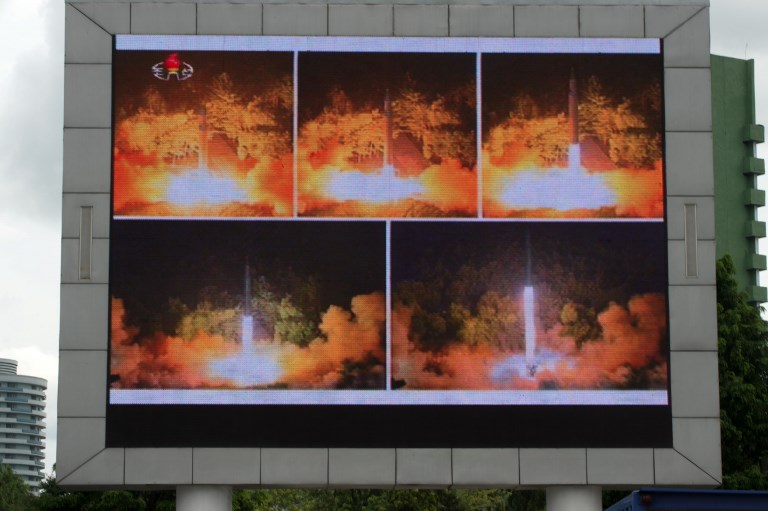 WASHINGTON DC, USA – US President Donald Trump on Tuesday, October 10, discussed “a range of options” with his national security team to respond to North Korea’s recent missile and nuclear tests, his office said.

The briefing by his defense secretary James Mattis and top military officer General Joseph Dunford “focused on a range of options to respond to any form of North Korean aggression or, if necessary, to prevent North Korea from threatening the United States and its allies with nuclear weapons,” according to a brief statement.

It came days after he said that diplomatic efforts with North Korea have consistently failed, adding that “only one thing will work.”

Trump has engaged in an escalating war of words with North Korean strongman Kim Jong-Un, trading insults amid rising tensions between the two nuclear-armed rivals.

“Presidents and their administrations have been talking to North Korea for 25 years, agreements made and massive amounts of money paid,” Trump tweeted Saturday.

It “hasn’t worked, agreements violated before the ink was dry, makings fools of US negotiators. Sorry, but only one thing will work!”

Trump’s administration has also been at the forefront of a drive to impose a series of sanctions against North Korea in response to its sixth nuclear test – the largest yet – and the firing of two missiles over Japan.

The United States fought a bloody conflict in Korea from 1950-1953 that ultimately ended in stalemate and the continued division of the peninsula after hundreds of thousands of Chinese troops entered on the side of the north, turning it into a war of attrition. – Rappler.com