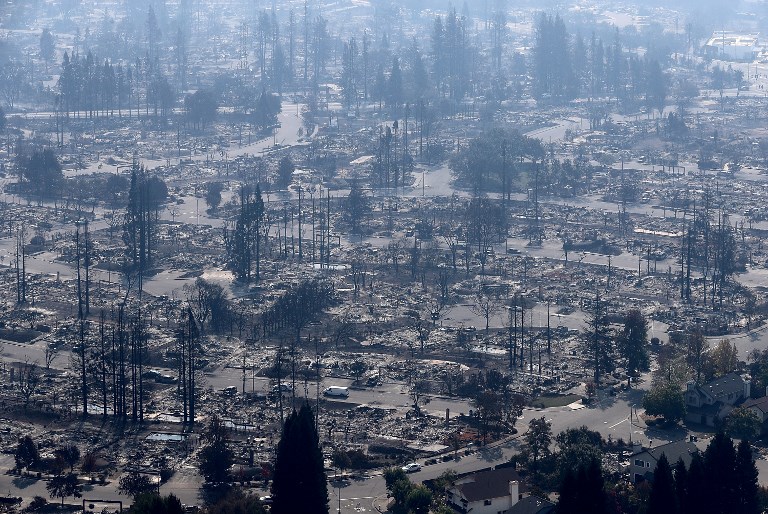 CALIFORNIA, USA (UPDATED) – More than 200 fire engines and firefighting crews from around the country were being rushed to California on Wednesday, October 11, to help battle infernos which have left at least 23 people dead and thousands homeless.

“This is a serious, critical, catastrophic event,” California fire chief Ken Pimlott told reporters. “We’re not going to be out of the woods for a great number of days to come.”

Pimlott said that after a respite on Tuesday, October 10, winds were kicking up again on Wednesday and the winds and dry conditions were hampering efforts to contain the blazes.

“We are still impacted by 5 years of drought,” the director of the California Department of Forestry and Fire Protection (Cal Fire) said.

“These fires were driven by the critically dry fuel bed,” he added. “We are literally looking at explosive vegetation.”

Pimlott said the death toll from the fires, among the deadliest ever in California, could be expected to go up further.

Thirteen of the deaths have occurred in Sonoma County, a wine-producing region which has been particularly hard hit, while 6 people have died in Mendocino County. There have been two deaths in Napa County and two in Yuba County.

Entire neighborhoods in Santa Rosa, a city of 175,000 which is the county seat of Sonoma County, have been reduced to ashes.

Thousands of people have been left homeless and 25,000 people have evacuated their homes in Sonoma County alone to escape, according to officials.

More than 3,500 homes and businesses have been destroyed including several wineries in Sonoma and Napa counties, the heart of the state’s wine production.

Six hundred people have been reported missing in Sonoma County, but more than half of them have been located, Sheriff Robert Giordano told reporters.

“There’s still 285 on our missing list that we’re looking for,” he said.

Pimlott said firefighters were battling a total of 22 wildfires that have burned over 170,000 acres (68,800 hectares) and that reinforcements had been requested.

He said 170 fire engines had been ordered from the neighboring states of Arizona, Nevada, Oregon, and Washington and another 154 engines from elsewhere around the country.

In addition, 60 firefighting crews from other states were on their way to California to provide assistance, he said.

“Our primary goal is to get these resources into the fires,” Pimlott said.

He said 73 helicopters, 30 air tankers, and nearly 8,000 firefighters were currently taking part in the effort to extinguish the blazes.

President Donald Trump has declared a major disaster in California, freeing up federal funding and resources to help fight the fires. And Governor Jerry Brown declared a state of emergency in 8 counties.

Bob Nelson, 53, stopped in his black pickup truck at a police roadblock near Santa Rosa, said he fled his home on Sunday, October 8, and returned on Tuesday.

“There was no damage,” he said. “But then we got evacuated again.

“We don’t know about our house now,” Nelson told Agence France-Presse. “I’ve got no idea. It’s in the middle of two fires.”

Michael Desmond, 63, does know, and the news is bad: his home was one of hundreds destroyed by the blaze in the Coffey Park neighborhood of Santa Rosa.

“I feel violated; like a thief came in,” said Desmond, who sobbed as he surveyed the rubble of the house where he grew up.

Much of the damage in Santa Rosa can be seen from US Route 101, the north-south highway which runs from California through Oregon to Washington state.

The Sonoma County Hilton perched on a hill overlooking Route 101 is a ruin of charred wood and twisted metal, as is the nearby Fountaingrove Inn.

An enormous K-Mart store has been entirely destroyed with only a couple of blackened walls still standing.

Forest fires are common in the western United States during dry, hot months but, with 21 deaths so far, this year’s California fires are among the deadliest ever.

The Griffith Park fire in Los Angeles County in 1933 killed at least 29 people and 25 people died in the 1991 Oakland Hills fire. – Rappler.com