A year after King’s death, Thais prepare for final goodbye

Oct 13, 2017 1:52 PM PHT
Agence France-Presse
Facebook Twitter Copy URL
Copied
The past year has drawn out remarkable scenes of collective mourning across the kingdom, with many Thais expunging color from their wardrobes and donning only black and white for most of the year 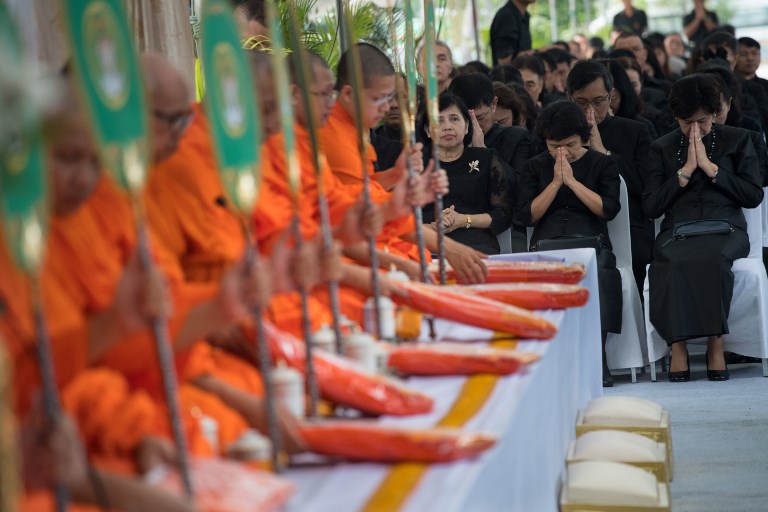 BANGKOK, Thailand – Monks led sombre ceremonies across Thailand Friday, October 13, to mark one year since the death of King Bhumibol Adulyadej, as the grieving nation prepares to bid a final farewell to the beloved monarch in a spectacular cremation ceremony this month.

Revered as a demi-god and loved as a “father” of all Thais, Bhumibol commanded deep devotion during his historic 70-year reign.

The past year has drawn out remarkable scenes of collective mourning across the kingdom, with many Thais expunging color from their wardrobes and donning only black and white for most of the year.

The solemn mood has deepened this October as many Thais grapple with having to say goodbye during his cremation on the 26th, an elaborate 5-day event that will send Bhumibol’s spirit to the afterlife.

On Friday black-clad Thais streamed into temples, state agencies and the courtyard of the Bangkok hospital where Bhumibol died to give alms to Buddhist monks in honor of the monarch.

“I don’t want the cremation ceremony to take place, I just can’t cope with it,” 57-year-old Kanokporn Chavasith, one of hundreds of mourners gathering outside the Grand Palace in Bangkok Friday, said through tears.

Another tearful mourner, 61-year-old Chalita U-sap, told Agence France-Presse: “I want him to stay with us forever.”

As the massive funeral draws nearer, TV channels have been ordered to reduce their color saturation, refrain from overly-joyous content and roll out documentaries highlighting the monarch’s good works.

Businesses have erected portraits and tributes to the king, while parks and pavements have been lined with marigolds – a flower associated with Bhumibol because of its yellow color.

The mourning has been encouraged and orchestrated by the ultra-royalist junta that seized power in 2014 as Bhumibol’s health was declining.

A severe royal defamation law, which has been vigorously enforced by the junta and landed critics decades in jail, makes it difficult to measure the role that social pressure plays in drawing out displays of devotion.

Frank discussion of the monarchy and its role in Thai politics is barred under the lese majeste law, which has embedded a culture of self-censorship across the arts, media and academia.

The new monarch has yet to attain his father’s level of popularity and has made moves to consolidate control over the palace bureaucracy and reduce government oversight during his first year on the throne.

Thailand’s crown has limited formal power but is one of the world’s richest and wields influence behind the scenes with the loyalty of much of the business and military elite. – Rappler.com