Oct 13, 2017 5:20 PM PHT
Agence France-Presse
Facebook Twitter Copy URL
Copied
According to a defense lawyer, there is no maximum penalty for contempt of court but other activists previously sentenced on contempt charges have received punishments of up to 3 months 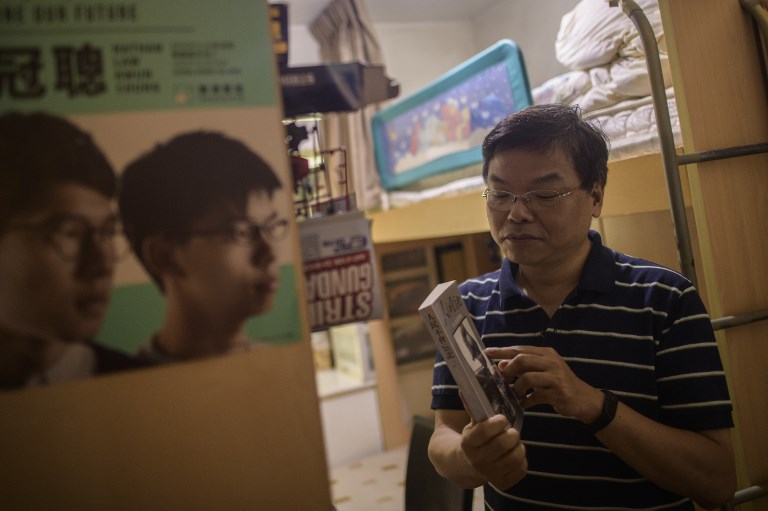 HONG KONG – Jailed Hong Kong activist Joshua Wong spent his 21st birthday in court on Friday, October 13, where he was found guilty of contempt for obstructing the clearance of a major encampment during the city’s 2014 mass Umbrella rallies.

Wong, who had already pleaded guilty to the charge, and 19 other activists were all found guilty, but the judge, who is also handling the corruption trial of the city’s ex-leader Donald Tsang, did not set a date for sentencing.

According to a defense lawyer, there is no maximum penalty for contempt of court but other activists previously sentenced on contempt charges have received punishments of up to 3 months.

Supporters in and outside the courtroom sang “Happy Birthday” prompting the 21-year-old Wong to smile and thank them.

Wong and two other student leaders were jailed in August for 6 to 8 months for their roles in the initial protest that sparked the months-long Umbrella Movement demonstrations and street blockades in 2014, convictions rights groups have called politically motivated.

Joshua Wong’s father Roger Wong earlier told the Agence France-Presse he was surprised by the prison term and shocked by the reaction of Hong Kong’s legal community, with two powerful organisations releasing statements defending the judicial system and judges.

“The elites in law were congratulating each other. I find that disgusting,” he said.

“I thought the statements would come with comprehensive legal analysis, but there was none of that… just brown-nosing,” he added.

The elder Wong, a retired IT professional, and his wife have been visiting their son in prison, and say he is putting on a brave face.

“If I was in his position, in front of my parents, I would say positive things too and not want them to worry,” said Wong, 53, speaking to AFP at the family’s compact apartment filled with photos, books and printed bible verses.

“I think the biggest pain for him is not being able to go on the internet,” he said.

Unlike most middle-class parents in education-obsessed Hong Kong, Wong senior said he was open-minded about his son’s studies and future path – they always knew he was politically minded.

When he was small, “he would have a bottle in his mouth but still continue to speak. Of course, we didn’t know what he was saying… (but) he always enjoyed expressing himself,” Wong said.

“His academic record would not be good enough for Oxford or Cambridge, but they have invited him over as a speaker – it’s just a different role,” he said.

Roger Wong has recently become active in his staunch anti-LGBT campaigning, which is a point of tension in the family as his son’s political party Demosisto supports legalising same-sex marriage.

But he said he would still have supported his son’s political career if he ran for office. Wong’s prison term now bars him from running for the next 5 years.

As Beijing and local authorities tighten the screws on political activism in the semi-autonomous city, Wong says he is not worried about this difficult path his son has chosen – he just wants him to stay strong.

“I hope he will keep his innocent heart to do what is right, and remain happy,” Wong senior said.

“Some things don’t show their results immediately, but you can persist.” – Rappler.com