Mahathir working hard to ‘get rid’ of ‘dictator’ Najib 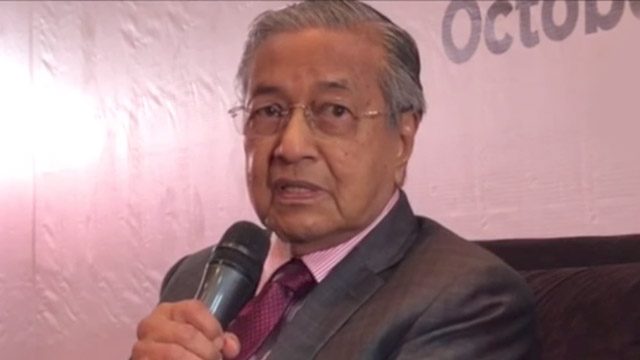 MANILA, Philippines – Former Malaysian prime minister Mahathir Mohamad admitted that he is “working very hard to get rid” of current Prime Minister Najib Razak, whom he called a dictator.

During the ASEAN Leaders Forum on Thursday, October 12, Mahathir said that he was instrumental in proposing and campaigning for Najib to become prime minister because they expected him to be like his father Abdul Razak Hussein, Malaysia’s second prime minister.

“Unfortunately he is not like his father,” Mahathir explained. “I am now working very hard to get rid of him and to return to the good old days when Malaysia was not beset with a lot of scandals that we have now. And we are hoping of course that when we have an election, then we would be able to form a new government.”

Najib has been under fire for allegations that he embezzled with his family and associates billions of dollars from a sovereign wealth fund. (READ: A year after 1MDB: Malaysian premier takes hardline turn)

On Thursday, Mahathir warned people to be careful about the leaders they choose, noting that it was power that “destabilized” Najib.

“He became completely different. He is today, in Malaysia, we call him a dictator, a tyrant. He throws people in jail. If you make a report against him you will likely to be called up by the police, questioned, jailed, and charged in court. That kind of thing has never happened in Malaysia before,” he said.

Mahathir added: “There were laws which enabled us to arrest and detain people without trial, but the laws were abolished. But he has introduced new laws which are even worse than the previous laws that he himself has got rid off. So we really cannot be very certain about people’s behavior once they are given power.”

Mahathir, who served as prime minister from 1981 to 2003, said he is now working together with people he had differences with in the past to “unseat” Najib.

“Anwar [Ibrahim] is now in jail not because of me but because of Najib. But the problem we are facing in Malaysia is so big that our differences count for nothing. So I am now working with the very people who used to condemn me…We agreed that the problem with Najib is much bigger than all our quarrels,” he explained.

According to the former prime minister, they have set up a new coalition of opposition parties in Malaysia in order to defeat Najib.

“He leads a big coalition of 13 bodies and inevitably, they’ll win elections. But if we want to defeat him, we too must form a coalition…. We are hoping that when it goes to election, the people will help us to defeat him,” Mahathir said. – Rappler.com