Abe on course for landslide win in Japan vote – poll

Oct 16, 2017 10:34 AM PHT
Agence France-Presse
Facebook Twitter Copy URL
Copied
After an initial burst of support for the media-savvy Yuriko Koike, critics say the Tokyo governor has suffered by not running herself in the election, meaning voters for her party are not sure who they are electing as PM 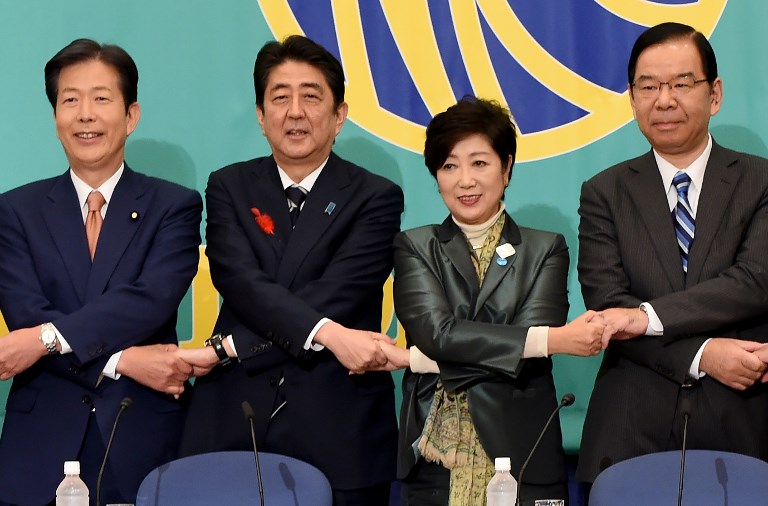 Abe’s conservative Liberal Democratic Party (LDP) is projected to win as many as 303 of the 465 seats up for grabs in the October 22 election, according to a poll by the Mainichi Shimbun.

Its junior coalition partner Komeito is expected to gain more than 30 seats, allowing Abe’s ruling camp to have a comfortable 2/3 majority in the powerful lower house, the poll suggested.

A two-thirds majority in parliament would allow Abe, 63, to push through an amendment to Japan’s pacifist constitution.

The hawkish premier has called for changes to the US-imposed law so Japan can turn its self-defense forces into a full-fledged army.

Support for Tokyo Governor Yuriko Koike’s newly founded Party of Hope, which has transformed Japan’s political landscape and swallowed up the main opposition Democratic Party, appears to be declining, with surveys predicting it might win up to 54 seats.

After an initial burst of support for the media-savvy Koike, critics say the Tokyo governor has suffered by not running herself in the election, meaning voters for her party are not sure who they are electing as PM.

“Expectations were high but the Party of Hope has nothing but Koike’s popularity,” said Koji Nakakita, professor of politics at Hitotsubashi University in Tokyo.

“Support for Abe’s cabinet is not so high but voters have no choice but to vote for Abe’s LDP,” Nakakita told Agence France-Presse, with the opposition parties facing “confusion and divisions.”

The 12-day election campaign has focused on reviving Japan’s once world-beating economy and tackling the ever-present threat of North Korea which has threatened to “sink” the country into the sea.

“This is an election to question how we can protect our people’s lives and good living from North Korea’s threats,” Abe said at a campaign rally in the northern city of Hokkaido on Sunday.

Abe is seeking a fresh term at the helm of the Asian economic powerhouse and key US ally and unexpectedly called a snap election to capitalize on a weak and fractured opposition.

But Koike, 65, stole his limelight by launching her party, attacking Abe’s government for being too slow to reform the country, weighed down by an aging population, deflation and a huge debt mountain.

Critics say Abe called the early election to divert attention from a string of scandals, including allegations of favoritism to a friend in a business deal — which the premier strongly denies.

The Mainichi poll was conducted on Friday, Saturday and Sunday (October 13, 14, and 15) across the nation, with more than 73,000 eligible voters questioned by phone. – Rappler.com