Pope gets philosophical with ISS crew in space chat

Oct 26, 2017 10:31 PM PHT
Agence France-Presse
Facebook Twitter Copy URL
Copied
The Argentine pontiff sits at a small desk inside the tiny city state, facing a wide-screen television on which the astronauts from America, Russia and Italy could be seen floating together in their blue suits 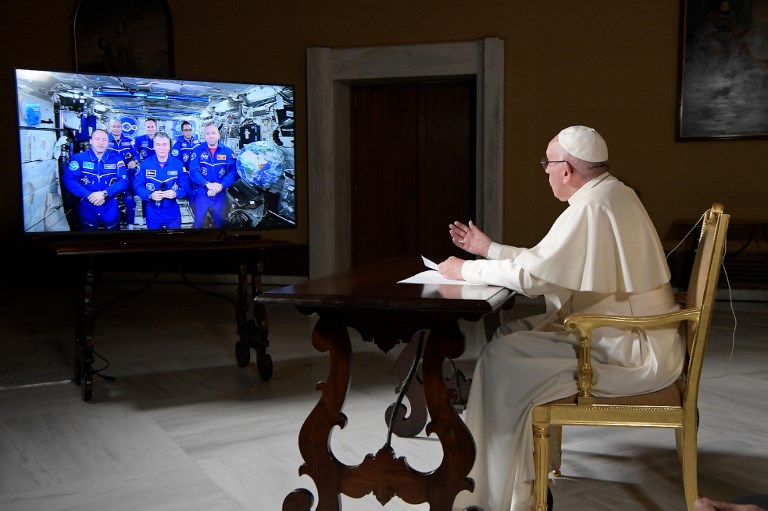 VATICAN CITY, Holy See – Pope Francis chatted with six astronauts at the International Space Station (ISS) on Thursday, kicking off the rare interview with a philosophical question on “man’s place in the universe.”

Italian Paolo Nespoli, 60, admitted that despite the bird’s eye view of Earth he too remained “perplexed,” while American Mark Vande Hei said seeing the planet from space made them “realize how fragile we are.”

The Argentine pontiff sat at a Vatican desk, facing a wide-screen television on which the astronauts from America, Russia and Italy could be seen floating together in their blue suits.

“Astronomy makes us think about the universe’s boundless horizons, and prompts questions such as ‘where do we come from, where are we going?'” he mused.

“Our aim here is to spread knowledge, (but) the more we learn, the more we realize we do not know,” admitted Nespoli, who is on his third trip into space.

“I would like people like you, theologians, philosophers, poets, writers, to come to space to explore what it means to be a human in space,” he said, as Francis nodded and smiled.

US mission commander Bresnik told the Argentine that from the visible thinness of the planet’s atmosphere shows how fragile life is on earth.

But the pope had not finished: what, he wanted to know, was their opinion of love as a force that moves the universe? What was their source of joy up in the space station, and how did a life without gravity change their view of the world?

The crew took it in turns to get their philosophical caps on, and not even a technical hitch which temporarily interrupted the interview, or the lack of a Russian translator, could throw the space travellers off course.

“I get the most joy by looking outside every day and seeing God’s creation, maybe a little bit from his perspective,” Bresnick said.

Far from wars, famines, pollution or human folly, he said “the future of humanity looks better from up here”.

Bresnik, 50, a former Marine Corps aviator who goes by the nickname “Komrade,” made his fifth career excursion outside the space station this month to carry out crucial repairs to the ISS’s robotic arm with NASA colleague Acaba.

Acaba, 50, the first person of Puerto Rican heritage to become an astronaut, cheerfully said hello to the pope in Spanish before tackling the question on how the men deal with ‘up’ and ‘down’ losing their meaning in space.

Francis is not the only Roman Catholic leader to have put in a call to the star-covered heavens.

The first pope to get on the line to space was Benedict XVI in 2011, who rang the ISS – which has been continuously occupied since 2000 – when Nespoli was once again among the crew. – Rappler.com