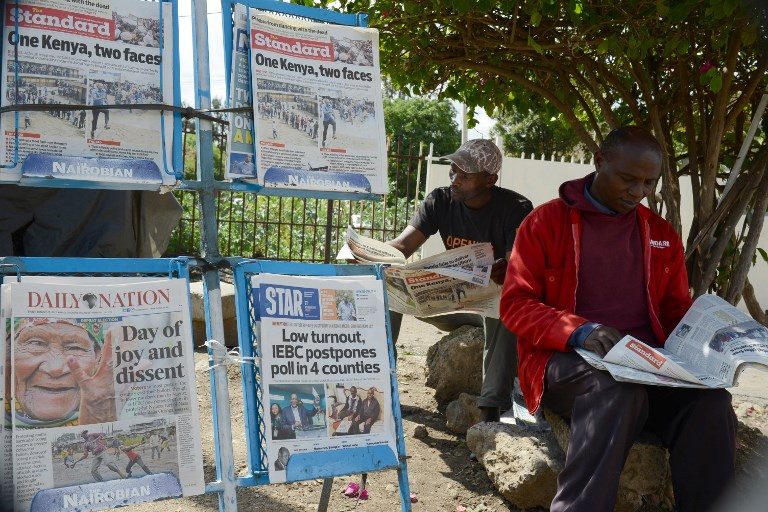 Kenyan President Uhuru Kenyatta is headed for a landslide win in the absence of his main rival Raila Odinga who boycotted the vote, however his legitimacy will be sorely questioned with initial figures showing only about a third of registered voters turned up.

In its post-election editorial the Daily Nation warned Kenya is now “more fractured and unstable than ever before” but added, “ours is a political problem that requires a political solution.”

“There is a need to forge inclusivity.”

The vote came after a two-month political drama that began when the Supreme Court overturned the victory of President Uhuru Kenyatta in August 8 elections due to “irregularities”.

Although the ruling was initially hailed as a chance to deepen democracy, reaction quickly soured with weeks of angry protests, acrimonious political rhetoric and intimidation of election officials.

Odinga refused to take part in the re-run, on grounds the election commission had failed to make the necessary changes to ensure a free and fair vote, however many supporters ignored his call to stay peacefully at home and instead attempted to block voting.

While the August election saw long queues of voters and ballots being cast long after closing time in some places, Thursday’s vote was a different story with many polling stations empty or welcoming only a trickle of people.

Election chief Wafula Chebukati said on Twitter that data from over 90 percent of constituencies showed less than 35 percent of 19.6 million voters had cast their ballot.

Kenya’s leading Daily Nation newspaper said the low turnout would mean “a serious question of legitimacy for the winner.”

It would be a huge fall from the nearly 80 percent rate in the August poll and proof the opposition boycott had held.

On Friday morning Chebukati said the central tally center in Nairobi had received results sheets from all but 10 percent of polling stations nationwide.

However, he had been forced to postpone the election until Saturday, October 28, in four protest-hit counties in the country’s west where Odinga enjoys overwhelming support.

The move, he said, was due to “security-related” challenges.

But the governor of Kisumu, an opposition stronghold in western Kenya where violence raged on Thursday, October 26, rejected the move, saying people would not vote while they were “mourning”.

He said he had invited Odinga and top leaders of his National Super Alliance coalition (NASA) to visit the city on Friday.

At least 4 people were shot dead and around 50 others wounded, most of them by live bullets, during Thursday vote, according to an AFP tally of figures from officials and medics.

One of the dead was a 19 year-old who died from blood loss after being shot in the thigh during clashes in Kisumu, police and hospital sources said.

A second person died from a gunshot wound to the leg in Kisumu, police said, after a polling center was “stormed” by a mob.

Police said another man was shot dead in Homa Bay, also in the west, “where a large mob attacked a small police facility” prompting officers to open fire “to protect themselves.”

And a 4th man was shot dead in Nairobi’s Mathare slum, another hotspot in the capital where police fired water cannon and teargas to disperse demonstrators.

The confirmed casualties raised to 44 the tally of people killed in election-related violence since the August poll.

The crisis is the worst since a 2007 election sparked politically-driven ethnic violence that left 1,100 dead. – Rappler.com