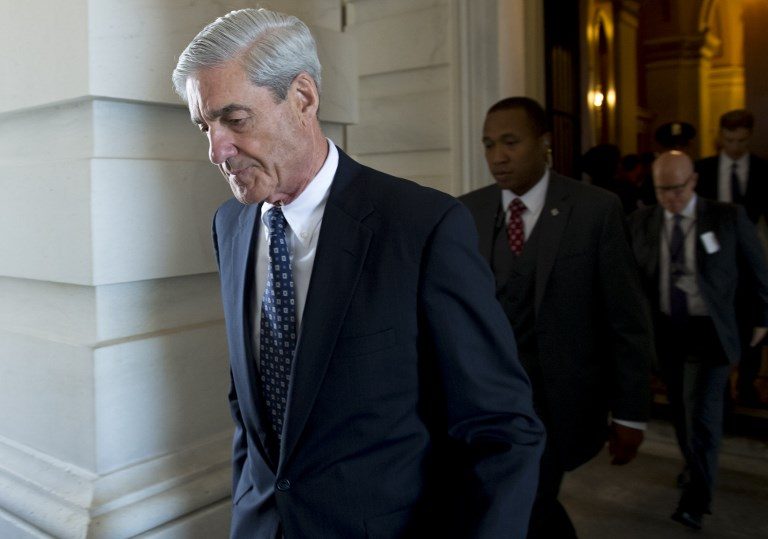 The former FBI chief sent a resounding message of much more to come when he unveiled money laundering charges against Paul Manafort, Trump’s former campaign chair, and Manafort deputy Rick Gates, and a plea deal with campaign foreign policy advisor George Papadopoulos for lying about contacts with Russians.

And he also demonstrated in the plea deal with Papadopoulos that 5 months after taking over the investigation, he has enough evidence to aggressively target anyone linked to Trump, taking the air out of calls to shut down the politically-charged probe.

That was evident in what attorney Aaron Zelinsky, a member of Mueller’s team, told the Federal District Court in Washington in the Papadopoulos case in early October.

“There’s a large-scale ongoing investigation of which this case is a small part,” he said ominously.

“This is very much just the beginning,” said Washington attorney Bradley Moss, a specialist in national security cases.

Mueller, who has not been heard from since taking over the Russia probe as independent counsel five months ago, opened his case with blockbuster charges Monday against Manafort, the veteran Republican campaign strategist, and business partner and campaign associate Rick Gates.

Both were both charged with money laundering, hiding offshore bank accounts and related crimes in relation to millions they earned working for former Ukrainian leader Viktor Yanukovych.

While he looms large in the Trump campaign story, said Moss, “Manafort was the shiny object that was distracting everybody. Papadopoulos was the critical piece of the story yesterday.”

The case against Papadopoulos, 29 and unknown until March 2016, when he was named a Trump campaign foreign policy advisor, hinges on many communications he had from London with the campaign headquarters.

The evidence showed little of the campaign’s response to Papadopoulos and masked the names of those with whom he communicated.

But what was there was tantalizing. In August 2016, one unnamed “campaign supervisor” encouraged Papadopoulos to travel to Moscow for a meeting with Russian officials. Another told him that Trump would not make such a trip, but that “someone low level in the campaign” could.

Critics say the evidence in his plea deal only paints Papadopoulos as an inexperienced person operating on the campaign’s margins.

Trump said he was “proven to be a liar” and the White House dismissed him as an unpaid volunteer with no real role.

But Randall Samborn, a veteran of Washington’s last major special prosecutor probe, into the unmasking of CIA agent Valerie Plame’s identity, called the plea deal a canny opening move by a master investigator.

It signaled that Mueller has a cooperating witness with the sharpest evidence yet that the Trump campaign was actively connecting to Russia.

“We learned that Mueller and his team are laser-focused and making progress on all aspects of their investigation,” said Samborn, vice president of Levick, a strategic communications firm.

“We are only seeing snippets of those excerpts that Mueller chose to give us,” he noted.

What is there, Samborn added, is “quite damning in terms of their willing participation.”

Still nothing on Trump

The plea deal did not have to be released now, he noted. But doing so blunted any criticism that Mueller’s team was getting nowhere in its work, Samborn said.

None of the evidence in the three cases unveiled Monday implicates Trump, either for Russia connections or for obstruction of justice, one of the allegations against the president that Mueller is known to be pursuing.

But the plea deal at least signals, analysts said, that Mueller has likely already interviewed the senior Trump campaign officials at the other end of the email traffic – which the Washington Post has identified as including Manafort, Gates, former campaign chair Corey Lewandowski, and national campaign co-chair Sam Clovis.

They and others now have to consider whether to cooperate more closely with Mueller to protect themselves, said Moss. And that includes Manafort and Gates, who face potentially heavy jail sentences on laundering charges that will be hard to beat.

“It’s kind of taunting people in Trump’s world, saying ‘I’ve got everything. I’m going to give you a sample of what I’ve got. Now is the time to cut deals, or I’m coming for every single one of you,'” Moss said.

“In white-collar cases, initially people often look to stick together. When push comes to shove, someone will crack.” – Rappler.com