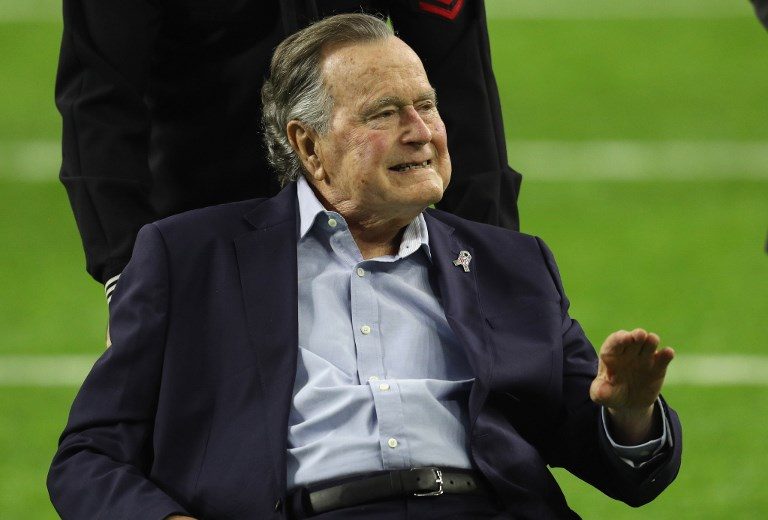 Facebook Twitter Copy URL
Copied
The revelations, contained in historian Mark Updegrove's 'The Last Republicans,' represent the strongest criticism to date from the Bush clan on why their Republican successor is uniquely unfit to hold office

WASHINGTON DC, USA – Former US president George H.W. Bush voted for Hillary Clinton in the 2016 election and called Donald Trump a “blowhard” who was driven by “a certain ego.”

His son George W. Bush left his ballot blank and said about Trump: “This guy doesn’t know what it means to be president.”

The revelations, contained in historian Mark Updegrove’s The Last Republicans, available in bookstores later this month, represent the strongest criticism to date from the Bush clan on why their Republican successor is uniquely unfit to hold office.

“I don’t like him,” the elder Bush told Updegrove in May 2016 before the elections in November of that year, according to excerpts of the book obtained by Agence France-Presse.

“I don’t know much about him, but I know he’s a blowhard. And I’m not too excited about him being (our) leader.”

The younger Bush, meanwhile, was skeptical about then-candidate Trump’s chances in a race in which his younger brother Jeb was an early favorite.

“Interesting, won’t last,” was his initial reaction when Trump entered the race.

Once the bombastic billionaire real estate magnate secured the Republican nomination, Bush expressed surprise and worried about Trump’s lack of humility, and thus his inability to recognize his own limitations and surround himself with more knowledgeable people.

“As you know from looking at my family,” Bush said, humility “is a certain heritage, that’s what they expect, and we’re not seeing that” in Trump.

After Trump said, “I’m my own advisor,” Bush quipped: “Wow, this guy really doesn’t understand the job of president.”

The comments are sure to escalate a long-running feud and come after George W. Bush gave a speech last month that condemned bigotry, bullying and lies in US politics in what was widely seen as a broadside against Trump even though the president was not mentioned by name.

The book’s title was inspired by the younger Bush’s concerns that he had been “the last Republican president” – not just because Clinton was seen as favorite to win the election, but because Trump represented a major break from traditional conservatism.

A White House official hit back, telling CNN: “If one presidential candidate can disassemble a political party, it speaks volumes about how strong a legacy its past two presidents really had.”

“And that begins with the Iraq war, one of the greatest foreign policy mistakes in American history,” the official added.

The younger Bush also pushed back hard on the widely-held perception during his time in office that his vice president Dick Cheney and secretary of defense Donald Rumsfeld controlled the White House from behind the scenes.

They “didn’t make one fucking decision,” he told Updegrove. – Rappler.com