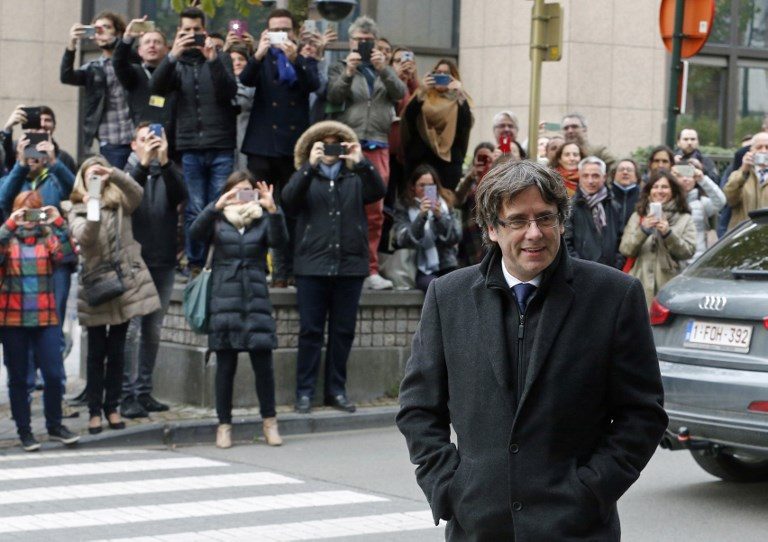 Facebook Twitter Copy URL
Copied
After his release, Carles Puigdemont tweets: 'Released without bail. Our thoughts are with colleagues unjustly imprisoned by a state that is far from democratic norms'

BRUSSELS, Belgium – Catalonia’s sacked separatist leader Carles Puigdemont on Monday, November 6, denounced Spain as an undemocratic country that “unjustly” jailed his colleagues, his first reaction since he was freed on bail in Belgium.

Puigdemont and 4 former ministers were released with conditions Sunday night after turning themselves in to Belgian authorities to face a Spanish warrant for their arrest on charges of rebellion and sedition.

“Released without bail. Our thoughts are with colleagues unjustly imprisoned by a state that is far from democratic norms,” Puigdemont said on Twitter hours after the five were released.

A Spanish judge in Madrid had on Thursday put Puigdemont’s deputy and seven other deposed regional ministers behind bars because of a risk they would flee.

Belgium’s Foreign Minister Didier Reynders insisted it was a legal matter and not one for politicians to deal with, despite recent criticism of Spain from some Flemish separatist members of his own government.

“We must let the Belgian and Spanish courts do their work,” Reynders told his country’s media.

Puigdemont and his allies escaped to Belgium a week ago after Spain dismissed the Catalan executive and imposed direct rule on the semi-autonomous region following the declaration of independence by the parliament there last month.

Spain issued European arrest warrants on Friday after Puigdemont and his allies ignored a summons to appear before a judge on allegations linked to the move to declare Catalonia an independent state.

Puigdemont’s PDeCAT party said Sunday that he had turned himself in to show his “willingness not to flee from the judicial process but to defend himself in a fair and impartial process, which is possible in Belgium, and highly doubtful in Spain.”

The next court hearing will be in the following 15 days. Belgium has up to 60 days to decide whether to send the Catalans back to Spain.

Puigdemont, who still describes himself as Catalonia’s “president,” has also said he is willing to run as a candidate in the December 21 regional election called by Prime Minister Mariano Rajoy to “restore normality” to Catalonia.

Puigdemont has said he and his colleagues – Meritxell Serret, Antoni Comin, Lluis Puig and Clara Ponsati – would cooperate with the Belgian authorities, some of whom are sympathetic to the ousted Catalan leaders.

“In Belgium they release us without bail, while in Spain we would be jailed,” Serret said on Twitter.

Puigdemont admitted last week that he had gone to Belgium partly in a bid to take the Catalan issue to the heart of the European Union, which has so far backed Madrid over the crisis.

But the case has caused tensions both between Belgium and Madrid, as well as within the government of Belgium, a country divided between French- and Flemish-speaking populations.

Belgian Interior Minister Jan Jambon, a member of the Flemish separatist N-VA party, questioned why the EU has failed to denounce the harsh crackdown by one of its 28 member states.

He accused the EU of double standards by taking legal action against the right-wing governments of Poland and Hungary for allegedly defying democratic norms.

Puigdemont, 54, insists that Catalonia earned the right to declare independence following the referendum and has described his detained colleagues as “political prisoners”.

On Sunday, protesters in Catalan cities took to the streets to demand their release.

Puigdemont said he was not convinced by guarantees of a fair trial back home, denouncing the “enormous pressure and political influence on judicial power in Spain.”

The judge could “refuse to hand over Puigdemont if there is a proven serious risk to his fundamental rights,” said Anne Weyembergh, president of the Institute of European Studies at the Free University of Brussels.

She said the court would need to see evidence of criminal offences before executing the warrant.

But cases of refusal are rare, according to several lawyers interviewed by AFP. – Rappler.com