‘They cannot silence us’: Kabul TV station back on air moments after attack 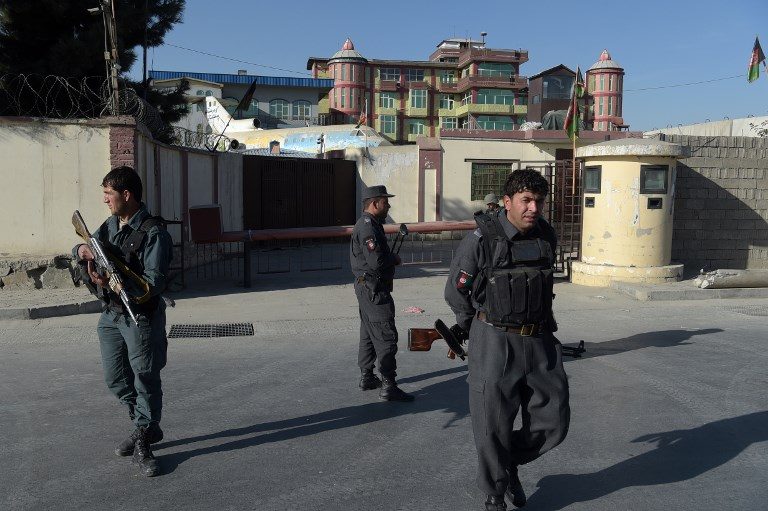 Facebook Twitter Copy URL
Copied
(UPDATED) The assault on Shamshad TV by militants disguised as policemen, which was claimed by the Islamic State (ISIS) group, highlights the risks facing journalists who are increasingly targets in the war-torn country

KABUL, Afghanistan (UPDATED) – A defiant Kabul TV station was back on the air Tuesday, November 7, moments after the end of an attack by gunmen who had stormed the broadcaster, killing at least one person and leaving two dozen wounded.

The assault on Shamshad TV by militants disguised as policemen, which was claimed by the Islamic State (ISIS) group, highlights the risks facing journalists who are increasingly targets in the war-torn country.

After about 3 hours of fighting Afghan special forces overpowered the attackers, who were armed with guns and grenades, and freed staff trapped inside the building.

“The attack has ended. According to the commander of the special forces all the staff who were inside the building have been rescued,” Shamshad TV announced as it went back on the air.

A Shamshad news presenter, his hands bandaged after cutting himself on glass as he fled the attackers, told viewers that 20 colleagues had been wounded. Six were in a critical condition.

“We have all come back (to work), all our journalists and colleagues are back on duty,” he said.

Shamshad news director Abid Ehsas, interviewed by rival Tolo News at a hospital in the Afghan capital where some of his wounded colleagues were being treated, said: “This is an attack on freedom of media but they cannot silence us.”

The station reported that one attacker blew himself up at the gate. Another went inside and shot at staff before going up to the roof to fire at security forces.

Special forces had to blast their way through a wall of the compound to enter the premises of the Pashto-language broadcaster.

“I was in my office when gunmen wearing police uniforms attacked the building,” Ehsas said.

“They killed one of our guards and entered the building and started firing. Most of us were able to flee but some were wounded and some jumped out of the windows.”

He said the station had not received any threats before the attack.

Gunshots could be heard inside the building every few minutes during the assault as more and more security forces and emergency services swarmed the area.

An employee told Agence France-Presse he had seen 3 attackers entering the building on security cameras.

“They first shot the guard and then entered the building. They started throwing grenades and firing,” Shamshad TV reporter Faisal Zaland, who escaped through a back door, told Agence France-Presse.

In a tweet the Afghan Journalists Safety Committee (AJSC) renewed its call for “the government to take all preventive measures to protect” the media – sentiments echoed by Amnesty International.

ISIS claimed responsibility for the assault in a statement released by their Amaq propaganda agency. The Taliban had earlier released a Twitter statement denying involvement.

Pashto is one of the official languages in Afghanistan and is spoken mainly in the south where the Taliban have a large presence.

The attack spotlighted the increasing dangers faced by media workers in Afghanistan as security worsens.

The country suffered its deadliest year on record for journalists in 2016, according to the AJSC, with at least 13 media workers killed. That made it the second most dangerous place for reporters in the world after Syria.

A Taliban suicide bombing in Kabul in January last year killed seven employees of popular TV channel Tolo, which is often critical of the insurgents, in what the militant group said was revenge for “spreading propaganda” against them.

It was the first major attack on an Afghan media organization since the Taliban were ousted from power in 2001.

The first half of 2017 saw 10 Afghan journalists killed, the AJSC said in July.

Kabul has been rocked by a series of deadly attacks in recent weeks as the Taliban and Islamic State group step up offensives against security installations and mosques.

Security in the capital has been ramped up since a May 31 truck bomb exploded on the edge of the so-called “Green Zone”, killing around 150 people and wounding 400 others.

That attack also caused extensive damage to 1TV, a private news channel near the bombing site. Like Shamshad on Tuesday, it managed to resume operations within a few hours.

Special truck scanners, barriers and permanent and mobile checkpoints have been rolled out across the city since the May bombing.