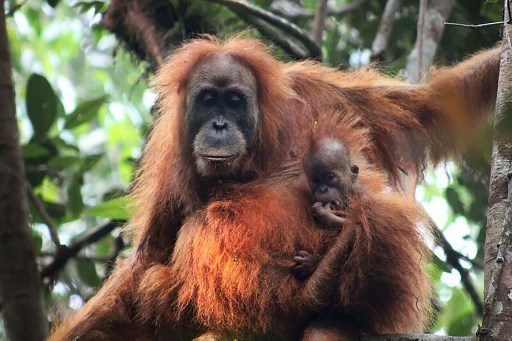 JAKARTA, Indonesia – A new species of orangutan has been discovered in the remote jungles of Indonesia, immediately becoming the world’s most endangered great ape, researchers said last week.

“It’s the first declaration of a new great ape species in about 100 years,” Ian Singleton, co-author of the study and director of the Sumatran Orangutan Conservation Programme, told AFP.

The species, called ‘Tapanuli orangutan‘, lives in the Batang Toru forest on Sumatra island, and numbers only about 800 in total, making it the most endangered great ape in the world, Singleton added.

Until recently, scientists thought there were only two genetically distinct types of orangutan, Bornean and Sumatran.

But in 1997 researchers at the Australian National University discovered an isolated population of the great apes in Batang Toru, south of the known habitat for Sumatran orangutans, and scientists began to study the group to see if it was a unique species.

Researchers studied the DNA, skulls and teeth of 33 orangutans killed in human-animal conflict before concluding that they had indeed discovered a new species, giving it the scientific name Pongo tapanuliensis.

Outwardly the Tapanuli orangutan bears a closer resemblance to its Bornean counterpart, with cinnamon-coloured fur that is frizzier than its Sumatran relative. It also has a “prominent moustache”, according to the findings published in the journal Current Biology.

Its skull and bone structure are slightly different from its relatives and so is its behavior, with the long calls of male orangutans lasting on average 21 seconds longer with a greater number of pulses.

But its tiny population is under severe threat from mining, agricultural encroachment, illegal logging and a proposed hydroelectric dam, which would flood up to eight percent of its habitat.

The authors of the study said conservation measures need to be urgently implemented.

“Orangutans reproduce extremely slowly, and if more than one percent of the population is lost annually this will spiral them to extinction,” co-author Serge Wich, professor at Liverpool John Moores University, said.

Both Sumatran and Bornean orangutans are listed as critically endangered by the International Union for Conservation of Nature (IUCN).

The Sumatran orangutan population is estimated to be just under 15,000, while about 54,000 orangutans are thought to live in Borneo, according to the IUCN.

Rampant logging and the rapid expansion of palm oil plantations have been blamed for destroying their jungle habitat. The primates have also been attacked by villagers who view them as pests and targeted by poachers to be sold as pets. – Rappler.com