ASBURY PARK, USA (UPDATED) – Cautious campaign officials had not expected the New Jersey gubernatorial race to be called before at least 9:30 pm, about 90 minutes after polls had closed. But shortly after 8 pm, CNN, then a few other networks, began announcing Phil Murphy, the Democratic nominee, as the next governor from the Garden State.

“I am a horrible skeptic and cynic in my life in general sometimes, so I’m excited and I just hope that it holds,” said Derek Roseman, media spokesperson for Murphy.

As Bon Jovi tunes played throughout the Grand Arcade of the Asbury Park Convention Hall, election night headquarters for the Murphy campaign, the realization sunk in that Murphy had seized power in Trenton back to the Democratic Party after 8 years and two terms of Republican Chris Christie.

At about 9:40 pm, Murphy’s Republican foe Kim Guadagno had conceded defeat before her supporters in Aberdeen Township. With 99% of precincts reporting, Murphy led 55.4% to 42.5%, according to The New York Times.

Murphy, a former Goldman Sachs executive who had served as ambassador to Germany under former US President Barack Obama, had run on a campaign that included the legalization of marijuana, which he estimates would raise $300 million annually in tax revenue and ease the disparity of incarceration for persons of color in the state for low-end drug offenses, and other liberal tenets such as raising the minimum wage to $15 an hour, progressive taxation and making New Jersey a “sanctuary state” against US President Donald Trump’s aggressive anti-immigration platform.

With Democrats enjoying majorities in the State Senate and Assembly, Murphy will find an accommodating environment to push through his agenda when he takes office in January.

Murphy, who was accompanied by his wife Tammy, their 4 children, plus Lieutenant Governor-elect Sheila Oliver and US senator Cory Booker, walked through the crowd to the stage and at one point “raised the roof” as he spoke of a “fairer economy,” “tax fairness” and “real property tax relief” for the middle class and seniors. Where he got his loudest applauses was when he spoke of opposing Trump, vowing to “push back against the mean winds blowing at us from Washington D.C.”

“This is one of the first major elections since Donald Trump was elected. Tonight New Jersey sent an unmistakable message to the entire nation: We are better than this,” said Murphy, 60.

“Whether it be attacks on public education, or our environment, or attempts to demonize our immigrant neighbors, or deport our DREAMers, or efforts to push through a federal tax plan that would hurt our state more than any other, or mean spirited actions to gut our health care… we will stand with steeled spines and simply say ‘with all due respect Mr. President, you will not do that in the great state of New Jersey.'” 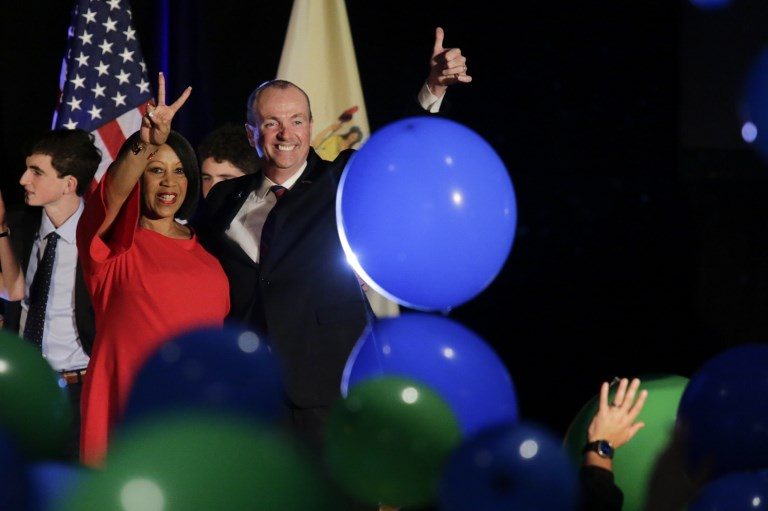 New Jersey, a state of nearly 9 million people, is home to approximately 126,000 Filipino Americans according to the 2010 Census.

Don Tagala, an ABS-CBN reporter based in Jersey City, NJ, lists immigration, the economy and safety concerns as paramount issues for Filipino-American voters, regardless of party affiliation, but saw opposition to Trump as an energizing force among Pinoy Democrats in the Garden State.

“One thing for sure, the great political divide is also evident in the Filipino Community,” said Tagala. “Democrat and Independent Filipinos have always been anti-Trump, not necessarily pro-Hillary [Clinton] or pro-Bernie [Sanders] but are just generally unhappy with everything the President is doing or undoing for the US.”

Guadagno, the Lieutenant Governor under Christie, had sought to to distance herself from the 2016 presidential candidate, who after “Bridgegate“, “Beachgate” and numerous other scandals had sunk to an approval rating of 15% in a Quinnipiac University conducted in late-October.

The former sheriff of Monmouth County had criticized her political partner for trying to raise the gas tax in the state, and said it was “beyond words” when he was spotted enjoying the beach on Labor Day after beaches had been closed due to a government shutdown, and laughed off a question of whether she’d appoint Christie as senator if Democrat Bob Menendez was convicted of corruption charges.

Still, Christie’s legacy, and the challenge of running as a Republican in a state where Clinton defeated Trump by 14 points last year were too great to hurdle.

New Jersey was one of two states electing governors on Tuesday, November 7. In Virginia, Democrat Ralph Northam is the projected winner over Republican Ed Gillespie to replace Democrat Terry McAuliffe.

The Republican Party currently controls 34 of the country’s governorships, while Democrats are governors in 15 states with one state independent. Democrats in the room are hanging their hopes that the two victories in the gubernatorial race are a harbinger for the party’s success in the 2018 midterms, as Democrats look to take back the Senate and House of Representatives after losing the presidency, 1,000 state legislative seats nationwide and 12 governor’s offices in recent years.

“Certainly after last year’s election, when Democrats were feeling at their lowest, we staked our flag pretty early with Phil that New Jersey would be the place where the first steps back from the Trump politics would begin,” said Roseman.

“We worked really hard over the last year so that Democrats in New Jersey would not wake up with the same disappointment from last year.” – Rappler.com