Nov 8, 2017 11:03 AM PHT
Agence France-Presse
Facebook Twitter Copy URL
Copied
The vote is seen as a ringing endorsement for De Blasio's anti-Trump stance in an overwhelmingly Democratic city where 80% of the electorate voted for Hillary Clinton and Trump is despised 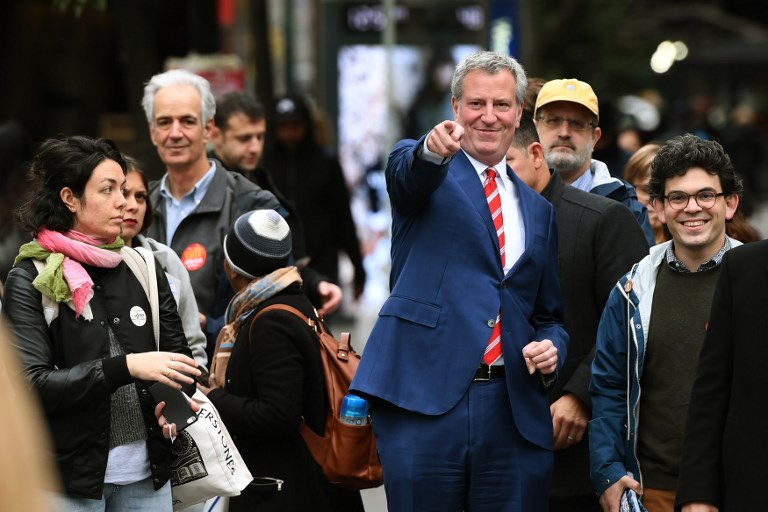 With 79% of votes counted, de Blasio was swept into office for another 4 years, on a commanding lead of 65% compared to 29.7% for Trump-voting Malliotakis, The New York Times reported.

Even with a low turnout, that was no mean feat in the financial capital of the world’s biggest economy, where the left-leaning politician presides over an annual budget of $85 billion, a city payroll of 295,000 and 8.5 million New Yorkers.

The vote was seen as a ringing endorsement for De Blasio’s anti-Trump stance in an overwhelmingly Democratic city where 80% of the electorate voted for Hillary Clinton and Trump is despised.

“My hope is, starting today, if the people are with me, then we restore the idea this is a consistent Democratic and progressive town, and that goes on for many years to come,” de Blasio said earlier Tuesday.

Since Trump swapped Fifth Avenue for the White House, the mayor has emerged as a strident opponent, regularly denouncing the Republican’s attempts to restrict immigration and repeal the Affordable Care Act.

De Blasio won praise for achieving his signature campaign promise of launching universal pre-Kindergarten education for four-year-olds, and already rolling out a phased induction of three-year-olds.

The economy is doing well and crime is down, continuing the long-term trends, yet enthusiasm for the man has always been lackluster.

The mayor, physically imposing at 6 foot 5 (1.96 meters) has been criticized for schlepping out to his Brooklyn gym, lateness and for lacking charisma of his billionaire predecessor Michael Bloomberg.

He has fended off federal and state investigations into fundraising – no charges have been brought. An early confrontation with police – having warned his bi-racial son to take “care” with officers, has long since dropped off the headlines.

He lacks a cozy relationship with Wall Street – his politics too center-left for comfort when it comes to the wealthiest powerbrokers, and has come under fire over the rising homeless population. – Rappler.com