Nov 8, 2017 1:09 PM PHT
Agence France-Presse
Facebook Twitter Copy URL
Copied
The results amount to a sweeping repudiation of what critics have called Trump's politics of division, and a test of his influence ahead of electoral battles looming on the state and national level 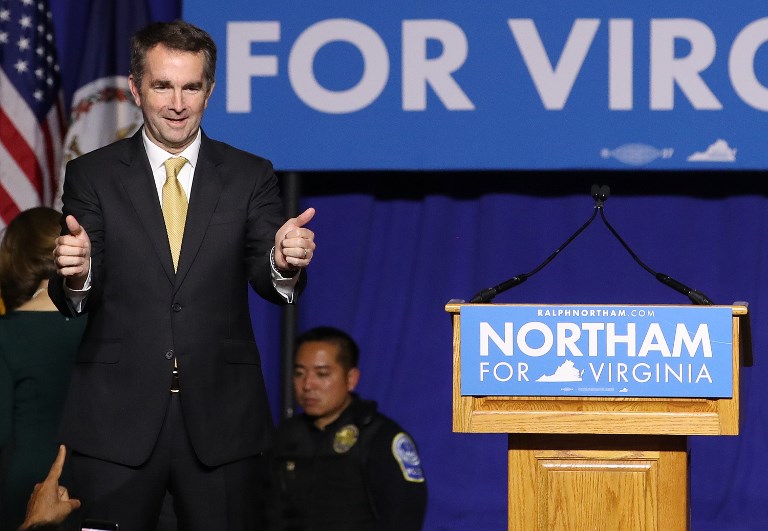 WASHINGTON DC, USA – Donald Trump suffered a humbling triple defeat, with Democrats winning high-profile state and mayoral elections, dousing any exuberance on Wednesday’s (November 8) anniversary of his dramatic election win and underscoring the struggles he faces as an unpopular president.

The results from Tuesday night (November 7) elections amount to a sweeping repudiation of what critics have called Trump’s politics of division, and a test of his influence ahead of electoral battles looming on the state and national level.

The most damaging defeat was in Virginia, a state bordering Washington seen as a bellwether for national politics with the country gearing up for the 2018 congressional elections and the next presidential contest in 2020.

The Virginia governor’s race had all the makings of a nailbiter, but in the end, Lieutenant Governor Ralph Northam trounced his Republican rival Ed Gillespie by an unexpectedly wide nine percentage points in the southern battleground state.

And in New York, progressive Mayor Bill de Blasio rode a wave of hometown distaste for Trump to cruise to re-election in America’s most populous city.

Murphy and Northam painted their wins as rejections of the polarization that to a large extent characterized Trump’s 2016 campaign and much of his first year in the White House.

“Tonight, New Jersey sent an unmistakable message to the entire nation: we are better than this,” Murphy declared.

The results mark a revival of political fortunes for the Democratic Party, which had failed to win a number of previous special elections in several states this year triggering concern about how to counter Trump’s influence in US politics.

“This is a referendum on American values,” Democratic National Committee Chairman Tom Perez said on CNN, speaking of the Tuesday night sweep.

An upset victory for Gillespie would have served to validate Trump’s aggressive style, and form a blueprint for how mainstream Republicans can embrace Trump issues without necessarily embracing the controversial man himself.

Going forward, they might be forced to rewrite their playbooks.

In his typically combative style, Trump swiftly sought to distance himself from Gillespie, who did not campaign with the president in Virginia.

“Ed Gillespie worked hard but did not embrace me or what I stand for,” Trump wrote in a scathing tweet from South Korea, where he is in the midst of a tour through Asia.

The president insisted that with the US economy doing well, “we will continue to win.”

But some analysts said the results suggest a Democratic wave might be on the horizon.

Virginia was a “blood bath” for Republicans, Michael McDonald of the University of Florida told AFP.

Even though Gillespie aired ads that fueled the culture-war debate on race, guns, illegal immigration and the fate of Confederate statues, his attempt to distance himself from Trump specifically just did not work.

“Trump sucks up a lot of the air in American politics, so it’s difficult for any Republican to run away from Donald Trump,” he said.

If Trump had not proven a drag on Virginia voters, it would demonstrate his overwhelming power to draw Americans to polls despite poor approval numbers.

And the party gained several seats in the 100-member House of Delegates, putting Republicans under threat of possibly losing control of the state legislature.

“There will be a lot of Republicans who are concerned” about how such a development might translate into losses in 2018’s congressional mid-term elections, McDonald said.

All 435 seats in the US House are up for re-election every two years.

Republicans currently hold a comfortable majority, but if they lose that advantage, Trump’s legislative agenda, including his longstanding effort to repeal and replace the existing health care law, would come under threat. – Rappler.com