America first? Global trade on the block as Trump heads to APEC 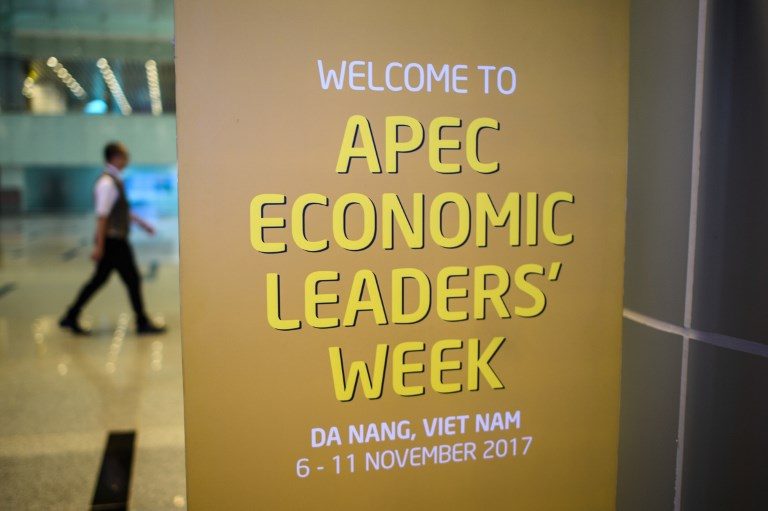 DANANG, Vietnam – The future of global trade comes under the microscope this week as Donald Trump addresses Asia-Pacific leaders in Vietnam, a visit that will be carefully examined for clues as to how his “America First” mantra will guide US engagement with the world.

During a sweep through Asia, the US president has sought to build a consensus against North Korean nuclear ambitions.

But he has also raised loud objections to what he calls “unfair” trade, an election campaign cornerstone that saw him scoop up votes by promising to re-write the rules of global trade in America’s favor.

Analysts expect him to put meat on the bones of his “America First” rhetoric in the Vietnamese city of Danang on Friday, November 11, when he arrives for the Asia-Pacific Economic Cooperation (APEC) summit, a forum of 21 nations representing 60% of global GDP.

Shortly after landing he will address a room packed with global CEOs – a speech that will be closely-watched for details on how he intends to engage with the world’s economy.

Trump wants to “ensure that governments do not unfairly subsidize their industries, discriminate against foreign business, or restrict foreign investment,” his national security adviser H.R McMaster told reporters ahead of his trip.

Previously the US President has said America’s powerhouse economy means it can write its own terms of trade bilaterally with its partners.

He has railed at mulitlateralism for supposedly pinching American jobs by giving an advantage to countries with cheap labour and heavy subsidies, pulling the US from the sprawling Trans-Pacific Partnership (TPP) pact.

The TPP was conceived as a 12-nation deal linking low tariff trade across the Asia-Pacific region to labour and environmental protections.

It was chiseled out under Barack Obama’s administration during a “pivot” to Asia, presented as a counterpoint to China’s growing regional heft.

But the ascent of the combative billionaire Trump – and the accompanying threat of an American retreat – has allowed China to stake out its ground as the new architect of global commerce.

When Trump speaks on Friday, the “indications are he’ll elaborate on this idea of an open and free Indo-Pacific region,” said David Dollar, an analyst at the Brookings Institution.

“I think they’re still trying to figure out exactly what this concept is. But it would be easy to interpret this as something of an anti-China effort.”

At the APEC summit, which begins on Saturday, November 11, he is likely to encounter other resistance to his trade narrative.

The block, which has a combined GDP of some $45 trillion, brings in 21 Pacific rim economies, from giants like the US, China and Japan, to poorer but booming nations like Vietnam and Indonesia.

A stream of world leaders – including Japan’s Shinzo Abe and China’s Xi Jingping – are expected to champion multilateralism in speeches bookending Trump’s address on Friday.

On the sidelines the remaining 11 TPP economies – which does not include China – are aiming to resuscitate their deal, without the US.

“Indications seem positive” for an agreement to press on with the so-called TPP-11 in Danang, a diplomatic source told Agence France-Presse.

There are hopes a revived TPP-11 – driven through by Japan – could eventually prod the US to return to the deal.

But as trade delegations met ahead of APEC, diplomats said the Washington appears poised to pare back its involvement in the global trade order.

The US has already opposed the use of “multilateral trading system” in the APEC leaders’ statement – a standard phrase used by the grouping, a senior trade official with knowledge of negotiations told Agence France-Presse.

Trump’s America First policy is not without its critics.

They say his focus on job losses to overseas competitors in certain industries fails to recognize the huge overall economic benefits free trade has brought the world’s largest economy.

Russian president Vladimir Putin will also take to the podium on Friday at a summit attended by senior executives including Sheryl Sandberg of Facebook.

Russia stands accused of interference in the election that parachuted Trump into the White House, including by sponsoring divisive social media content.

Trump and Putin are expected to hold discussions in Danang. – Rappler.com